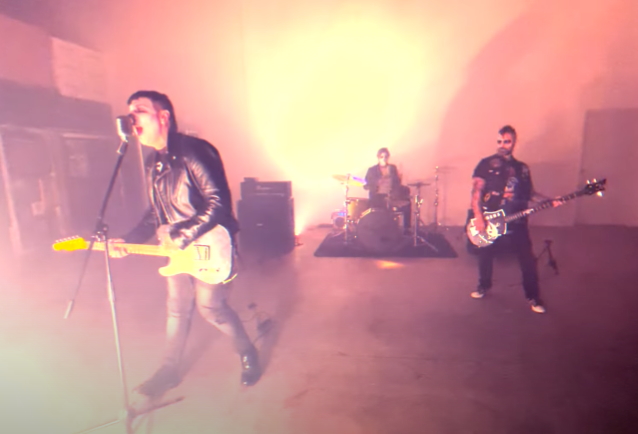 In celebration of Halloween this year, AVENGED SEVENFOLD has shared its cover of the classic MISFITS song "Last Caress".

Earlier today, the AVENGED SEVENFOLD YouTube channel was updated with a clip of guitarist Zacky Vengeance, bassist Johnny Christ and drummer Brooks Wackerman — with their faces painted in MISFITS-style makeup — performing "Last Caress". The band also included the following message: "Hello Boils and Ghouls. Last year a few of us gave you a cover of 'Hybrid Moments' by the MISFITS. We had so much fun that we wanted to keep the tradition alive this Halloween with one 'Last Caress'. Beware…"

When Vengeance, Christ and Wackerman released their version of "Hybrid Moments" last year, Zacky — who only provides backing vocals in AVENGED but takes on the frontman role with the two MISFITS songs — said in a statement: "We wanted to have a little fun with you to kick off the Halloween season. Brooks wanted to do a MISFITS song. I wanted to paint my face like KISS and call ourselves the KISSFits and Johnny wanted to drink and walk around town dressed like a skeleton. I forgot to paint my face like KISS. We still kept it punk rock and spooky for ya!"

AVENGED SEVENFOLD recently completed work on the long-awaited follow-up to 2016's "The Stage" album for a tentative early 2023 release. The LP was once again produced by Joe Barresi, who previously worked on "The Stage".

The deluxe version of "The Stage" arrived in December 2017. This edition featured seven additional studio songs plus four previously unreleased live tracks recorded during the band's shows at The O2 arena in London. Among the seven bonus tracks was the band's cover of the PINK FLOYD classic "Wish You Were Here".

AVENGED SEVENFOLD kept a low profile during 2019, before the pandemic. A blood blister on singer M. Shadows's vocal cords forced the band to cancel a summer 2018 tour with PROPHETS OF RAGE and THREE DAYS GRACE.