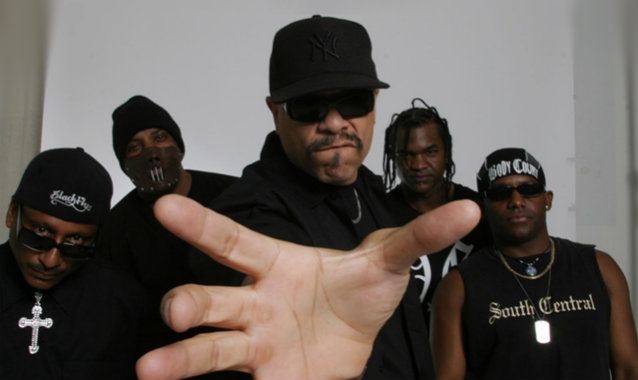 The new episode of the Ice-T's "Final Level" podcast (web site) features the first interview with the new lineup of his metal band BODY COUNT. The group also engages in an a cappella cover song of the "Mister Ed" theme song. You can now listen to the podcast using the audio player below.

BODY COUNT will take part in this summer's Rockstar Energy Drink Mayhem Festival, which kicks off on July 5 in San Bernardino, California.

BODY COUNT will release its new album, "Manslaughter", later in the year via Sumerian Records.

BODY COUNT's last album, "Murder 4 Hire", came out in 2006 via Escapi Music. Lyrically, the songs ranged from political ("The End Game"),personal ("You Don't Know Me [Pain]"),and religious ("The Passion Of The Christ"),to obsession ("In My Head"),armegeddon ("Dirty Bomb"),hate ("Lies") and relationships. A eulogy for fallen band member D-Roc was also included ("D Rocs [RIP]") as was a hilarious take on deep south rednecks ("Down In The Bayou"). The CD closed with "Mr. C's Theme", a show-stopping hard-rock instrumental.