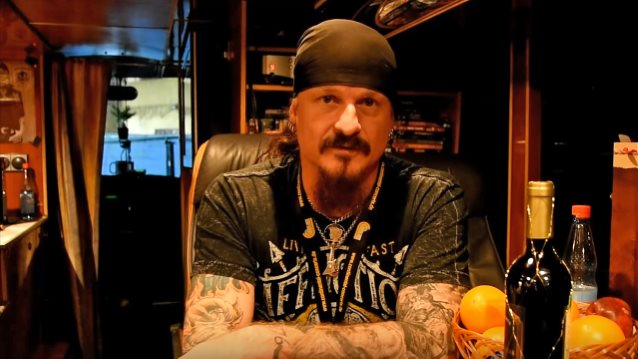 ICED EARTH To Release 'Incorruptible' Album In May; Listen To New Song 'The Great Heathen Army'

Metal Wani's Fernando Bonenfant conducted an interview with ICED EARTH founder, chief songwriter, and guitarist Jon Schaffer before the band's December 6 concert at Electric Brixton in London, England. You can now watch the chat below. A few excerpts follow (transcribed by BLABBERMOUTH.NET).

Schaffer: "Well, actually, ['The Judas Goat'] was a working title, and we canned that. So the album is gonna be called 'Incorruptible'. It's going to be out in May next year. We haven't spent really a year on the record. I bought a couple of buildings and turned it into the headquarters for the band, so that was a major amount of construction work to do, and build our own studio. So that's the headquarters now. And, really, only for the last four months have we been focusing on the album, on pre-production, the final arrangements and songwriting and everything. And now when we go back in January and we start master tracking, it will only take about five or six weeks to get the album finished. The way I work, the pre-production is where most of the time is spent so that we know exactly what we're gonna do when we get into master tracking and we just go for the best takes we can get at that point. So that's really where the bulk of the time was spent — on building the headquarters, building the studio, and then going in and doing the pre-production. So we're a little bit late, but it's gonna be worth it."

On how "Incorruptible" compares to previous ICED EARTH albums:

Schaffer: "They're all kind of their own thing, but I have a very strong gut feeling about this, and so does everybody in the band, that this is one of the really special ones. So I put it up there with 'The Dark Saga' [1996], 'Something Wicked This Way Comes' [1998], 'Dystopia' [2011] — it's in that league of records — so it's really gonna be something special, man. I know musicians always say that, but there is something going on here, so it's cool. We're all very excited about it."

On the concept for the lyrics on "Incorruptible":

Schaffer: "There is no concept on this record; it's just ten individual tracks not related to each other. Actually, on 'Plagues Of Babylon' [2014], it was only the first six that were related to the 'Something Wicked' story; it was like a zombie apocalypse within the 'Something Wicked' framework. But this album, it's just ten individual songs. We have one with a very cool Native American vibe called 'Trail Of Tears'; we have one called 'Clear The Way', which is about the Irish Brigade at the Battle Of Fredericksburg — very tragic, actually — but that's a big epic, like ten minutes; and then we have one called 'Black Flag', which is a pirate song. It's quite a… I think I pulled it off pretty well with the lyrics, to be able to tell such a big story in a very short amount of time. I think it's gonna be a highlight of the record. And then on this tour, we're opening the show with a new song that will be the opener on the album — it's called 'The Great Heathen Army' — that's got a Viking kind of a vibe to it. So there's a lot of different things, and none of it's really related. There's one called 'Raven Wing'… I can't really think of all of them righ now… 'Seven-Headed Whore' — that's one that's actually pretty brutal; it's like a total kick in the balls. But, you know, there's a lot of varied emotions on this, and it's cool stuff, man."

Schaffer: "Well, he came at the end of… for about the last month or so of pre-production… maybe a little bit more… five weeks… and we worked on his vocal parts. We do it like Stu and I normally do it. Some of the stuff we write together. I mean, I write the musical arrangements and do all that — he doesn't play any instruments — but he comes in… At the end of the writing process is when we focus on his parts. And the lyrics that we worked on together, on a song called 'Brother', which is about our brotherhood, [between] Stu and I and within the band… We've gone through a lot of shit together and we've had a lot of great times together, but the bond is very strong, and that's clear. So it's just a song, really, for us. And then he wrote the lyrics for 'The Great Heathen Army'. I'm trying to think… I can't think of 'em, man; I have to look at the list [of songs]. But usually, he goes to an area and works, and I go in my area and work. And, like I said, on some songs we collaborate sometimes. On this one, the only we did was 'Brother'… We work in the way we always work. And it's a very cool chemistry."

On how ICED EARTH's lineup changes affect the creative process:

Schaffer: "Jake [Dreyer, guitar] coming in [this past September], he came into this really late, so he doesn't have any songwriting credit on ['Incorruptible'], but he's gonna be playing guitar solos on it. But he's got great ideas. One of the things when I audioned him, I wanted to hear where his head was at with original stuff, and he's got it. But from an energy standpoint, for sure. I mean, Jake's 24 years old, so he's bringing in a very youthful energy, and Luke [Appleton, bass] already does that as well. But I don't think it changes the… I mean, of course, they all bring their talent to it, but as far as the vision and the end result, [it] doesn't really change very much, because I know what I want. That's why ICED EARTH is a brand, that's why we've had a lot of success on every chapter of the band's history. I don't think there's any other bands that have had five lead singer changes that can say that they were successful through all of it, and we have been. So it's all about leading and knowing the vision and staying true to the vision. And that's the reason that I named this record 'Incorruptible' — because ICED EARTH is… That logo represents 32 years of dedication to heavy metal, and it is absolutely incorruptible. This vision can't be corrupted; there's no amount of money on earth. So that's the whole thing of what we're about. This is the real shit, it comes from a real place, and that's why we have some of the most loyal fans in the world, because they know it's real." 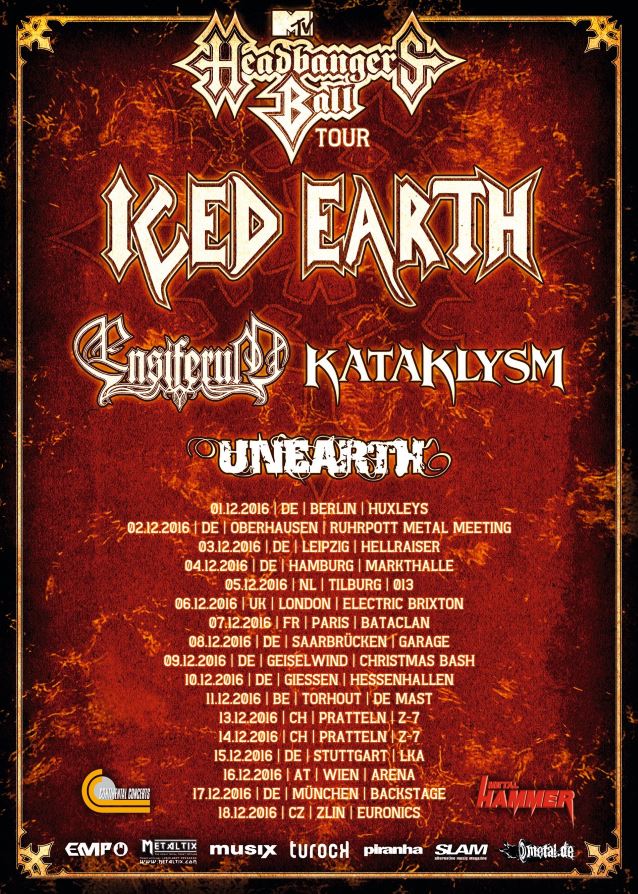