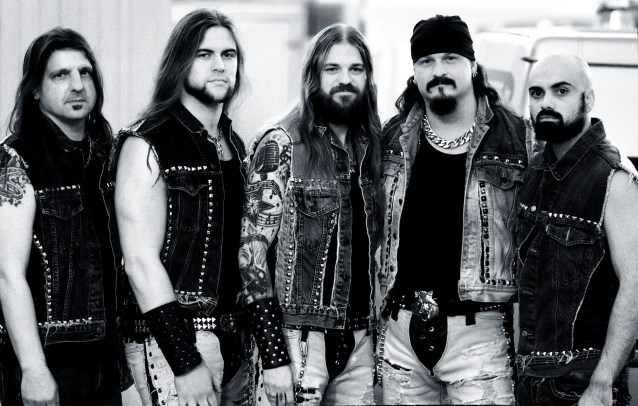 North American metallers ICED EARTH will make a special 12-inch vinyl EP available on their upcoming European tour with VOLBEAT, which kicks off October 11 in Milan, Italy and wraps December 1 in Copenhagen, Denmark.

Featuring the world premiere of the following songs:

* Plagues Of Babylon
* If I Could See You
* Peacemaker

Says ICED EARTH guitarist/mainman Jon Schaffer: "This is our own project and we are really excited about it. This will be for sale only at the VOLBEAT shows, first come, first served!"

He adds: "Band and crew have gathered and we have begun rehearsals for the VOLBEAT tour that kicks off this Friday in Milan. We are really excited to begin this new touring cycle even though it feels like the previous one only ended yesterday. It will certainly be killer to see you guys out there and hang with my brother Michael and the guys in VOLBEAT and their team."

ICED EARTH will release its new album, "Plagues Of Babylon", for a January 2014 via Century Media Records. The cover artwork was created and illustrated by Eliran Kantor (TESTAMENT, ATHEIST, SIGH, ANACRUSIS, GWAR).

Says ICED EARTH vocalist/guitarist Jon Schaffer: "This is a seriously heavy album with a seriously brutal album cover. I'm sure it will go down as a classic in the epic ICED EARTH catalog."

Speaking to Metal4 magazine at the Rockharz open-air festival in Germany in July, Schaffer said about the upcoming CD: "It's a bit of a different thing for us, because it's half of a concept and the other half is [standalone] tracks. Musically, I think it's just another step in the right direction. It's really heavy, it's very melodic. It has a really epic feeling. Even though there isn't, like, a monster, long epic track, the overall feel of the songs is very epic. I mean, there's no 'Dante's Inferno' or 'Gettysburg' or the 'Something Wicked' trilogy or something like that on here, but I'm really happy with it."

ICED EARTH recently parted ways with drummer Brent Smedley for "personal family reasons." He has since been replaced by Raphael Saini (CHAOSWAVE).

ICED EARTH has been hitting it relentlessly, with the recent studio album, "Dystopia", being the most toured album in the band's illustrious history.

One of the many highlights of the "World Dystopia Tour", a headline show at the historic Kourion Amphitheatre in Cyprus, was recently released on Blu-ray, DVD and in many other formats under the title "Live In Ancient Kourion".

"Dystopia" was released in October 2011 via Century Media Records. The CD marked the band's recording debut with singer Stu Block (INTO ETERNITY),who joined ICED EARTH in March 2011 following the departure of Matt Barlow. 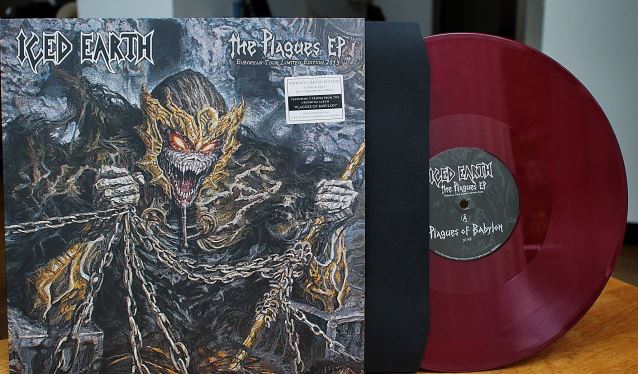