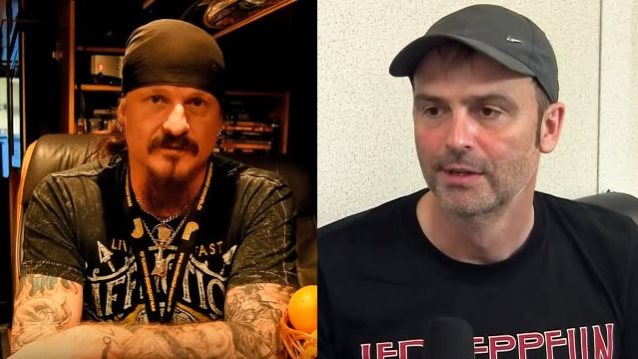 ICED EARTH mainman Jon Schaffer has confirmed that he and BLIND GUARDIAN frontman Hansi Kürsch are working on material for the long-awaited third album from their side project DEMONS & WIZARDS.

In a brand new interview with Metal Wani, Schaffer revealed that songwriting sessions for the follow-up to "Touched By The Crimson King" have officially begun, but cautioned that "it's gonna take some time. [Hansi] did work up two songs that I sent him of vocal melodies and cadences and I still have to fly him into the sessions and move him around and experiment with him and stuff and see how it's feeling," he said. "We're gonna take our time, but at least now we're actually doing it. So I would hope that next year we'll have it out. I hope that we can get the songwriting all dialed in in this calendar year in between the holes — he's busy, I'm busy — but at least we're actually moving forward with it for the first time in twelve years or whatever."

ICED EARTH's new album, "Incorruptible", will be released on June 16 via Century Media. The cover artwork for the disc (as well as additional illustrations to every song) was created by David Newman-Stump from Skeleton Crew Tattoo (pencil illustrations) and Roy Young (colors).

BLIND GUARDIAN will release a new concert album titled "Live Beyond The Spheres" on July 7 as a 3-CD and 4-LP box via Nuclear Blast. The set will include material recorded at various shows during the band's European tour in 2015. It will contain old classics, new tracks as well as songs that were very rarely performed during BLIND GUARDIAN's live shows.