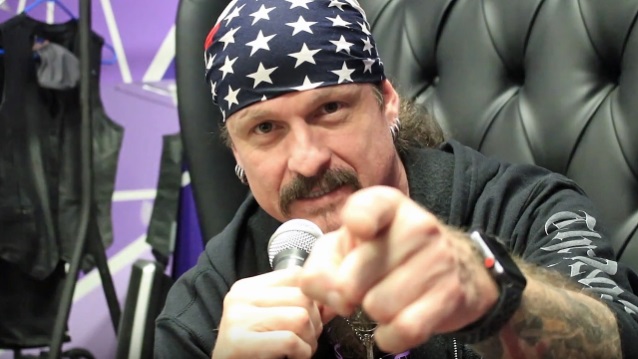 ICED EARTH's JON SCHAFFER: 'I'm Not A Fan Of Censorship At All'

Katie of the WSOU radio station recently conducted an interview with ICED EARTH leader and guitarist Jon Schaffer. You can now listen to the chat below. A couple of excerpts follow (transcribed by BLABBERMOUTH.NET).

On various lineup changes in ICED EARTH over the years:

Jon: "There's been a lot of amazing talent in the band through the years. But it's one thing to have great talent, and then it's another thing… sometimes you have great chemistry, but maybe the talent isn't all there that you really need to fulfill the ideas and to bring it to the maximum. The one thing I love about the lineup now is it's got it all. The chemistry… We hang out together on the bus when we're rolling down the road. Nobody's staring at their phones, like iPhone zombies, and we're not watching movies or playing video games. We end up hanging out together and talking the whole night, and we do that whenever we're together, we're having dinner together. It's really a brotherhood. So it's awesome. I don't expect or want any changes."

On having some of his lyrics censored in order to get them played on certain radio stations:

Jon: "I'm not a fan of censorship at all, because I'm very much a First Amendment guy. And I think it's weird that that would even be a topic in America; I don't think it should be. I mean, I guess there's a double-edged sword to that. We've played in China, and before we went to China — I guess it was on the 'Dystopia' world tour; we did Shanghai and Beijing — and before the government would issue our visas to get into the country, they had to look at the lyrics of the setlist that we were gonna perform. And the crazy thing that the only thing that was remotely against authoritarianism in that setlist was the song 'V', and we were wondering if that was gonna actually cause us to have a problem. But we put it in there and they were okay with that one. I mean, it isn't blatantly saying, 'Rise up and overthrow your tyrannical government,' but it is kind of saying that. [Laughs] I'm not a fan of censorship. I'm a freedom guy. I'm very much a libertarian type. I'm an American first. I don't play the divide-and-conquer game of the parties. I believe in freedom and personal responsibility — pretty much the stuff our founders stood for that seems to have been lost in the mire in the last century especially. That's just where I stand; let's put it that way."

ICED EARTH is continuing to tour in support of its latest album, "Incorruptible", which came out last June via Century Media. The cover artwork for the disc (as well as additional illustrations to every song) was created by David Newman-Stump from Skeleton Crew Tattoo (pencil illustrations) and Roy Young (colors).