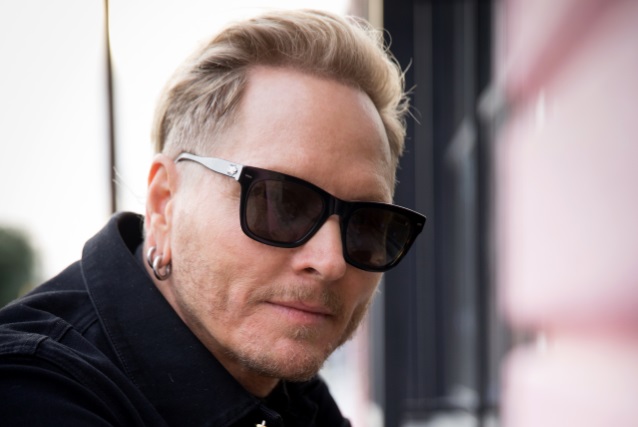 Former GUNS N' ROSES drummer Matt Sorum spoke to Yahoo! Finance about his latest venture: Artbit, a revolutionary distributed-ledger platform that allows both artists and fans to share and monetize artistic talent from anywhere across the globe.

Founded by Sorum, Pablo Martins, Renan Monjon, Saulo Monjon and Jean-Philippe Innocent, Artbit was created on the premise that the unsigned, unrepresented artists of today — musicians, street artists, dancers, magicians, and every street performer in between — are enhancing their communities and broadcasting their soul to the world with little or no monetary return. Artbit addresses this problem by providing exposure and capital to independent artists, while protecting their intellectual property and equipping them with the tools they need to manage the business side of their craft.

"My interest is in cutting the middleman," Sorum told Yahoo Finance. "That's been something on artists' minds for years. There's all these people you got to pay along the way. With blockchain, imagine if you bought a song online for 99 cents and that money was automatically distributed straight to all the contributors — the producer, all the writers of that song. With this technology, the money can go into everybody's wallets automatically, it doesn't go into a bank account where somebody's making all that money and interest."

By creating "virtual stages" using renowned artist hubs around the world, Artbit will allow up-and-coming creators to fund their passions through a crypto-economy powered by hashgraph.

"As we all know, platforms like Spotify, only a very small percentage of artists can even make money on that," Sorum said. "Any new or young artist has really got to work really hard to even get on the front page of a platform like Spotify — and even at that point you can't really monetize your art. With Artbit, we're going to have direct access, people are going to be able to get online right away, not be served a bunch of ads, and have a direct community to be able to monetize their craft now, with no middleman, direct payout, with a wallet, with crypto, and a community that's safe and secure, powered by hashgraph."

Artbit users will be able to produce live shows and performances through the platform, linking artists' performance locations to any of Artbit's virtual stages. Fans from around the world can then watch these live performances, conducting interactions (liking, sharing, and attaching AR filters) while generating micro-income for both the artist and curatorial public. Through the use of augmented reality and gamification, both fans and performers will have the opportunity to be part of the show.

"This whole crypto economy, this is the future," Matt said. "To me it's like the new rock and roll… Cutting out the middleman, they've done it with Airbnb, they've done it with Uber. The community is running the world now. Direct source. Traditionally what's happened in music for decades is that the artist is the last guy to get paid. At Artbit, we're going to make it the first guy to get paid."

Sorum and the Artbit team will be hosting an event in Austin, Texas on Friday, March 16 during SXSW to showcase the technology and vision of Arbit. Shepard Fairy, contemporary street artist and founder of OBEY, will be DJing the event, while Sorum and Billy Gibbons of ZZ TOP will perform to close out the event.