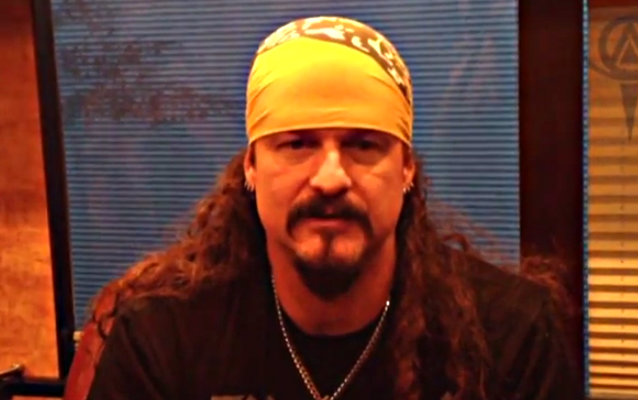 John Knowles of Metal Exiles recently conducted an interview with ICED EARTH mainman/guitarist Jon Schaffer. A couple of excerpts from the chat follow below.

Metal Exiles: So the new album is called "Plagues Of Babylon". It is completely done, and sounds great. What are some of your thoughts on the finished record, and are there any tracks that really stand out for you?

Jon Schaffer: The album came out really strong, the songwriting is great, the performances are really great. This is the first album I produced on my own for ICED EARTH. The challenges that I went through, I mean, it was recorded in Germany with four different engineers. It presented some challenges from working in three different rooms as well. It was a test of the metal, believe me, and I think that the end result came out really strong. As for highlights, I'd say there are several highlights on the album for me. Maybe the biggest being the track "Highwayman". My best friends in the industry all make an appearance on this album, from Hansi of BLIND GUARDIAN, Russell from SYMPHONY X/ADRENALINE MOB, Michael from VOLBEAT. With "Highwayman", it's a special thing with that song, I've wanted to do it for about three years now, and I finally was able to make it a reality. All of our schedules lined up so we could make it happen. And I think it says everything that needs to be said about the brotherhood, and our commitment to the way of life that we've chosen, and it's a big deal, man, it's a really big deal. That's one of the highlights, but there's a lot of highlights through the album.

Metal Exiles: That's really cool that you ended up producing the album yourself. Was it a challenge to record an ICED EARTH record without Jim Morris, and do you think you'll work with him again on future albums or was this more to do with your tour schedule?

Jon Schaffer: Well, this was definitely due to my tour schedule, I mean, I love Jim to death, man, he's my daughter's godfather, he's family. So it was difficult for both of us. I was just talking to him on the phone yesterday and he said it was crazy thinking he couldn't be over there with us while we were tracking everything, and I said I believe it, because I kept sending him texts saying, "Dude, I miss you" [laughs], because, you know we always have so much fun. So, yeah, I'm sure Jim and I will work together again, but as far as it being the next record, I don't know, because ICED EARTH is so active these days, we literally have to do it around our schedules for touring, and we had these ten or twelve festivals this past summer, and it would have required me flying back and forth on weekends from Europe to Florida to do it, and that really is not an option for me. I did that during "Dystopia" and I was jet-lagged as fuck, all summer. I told my manager that I would not be doing this again. I would literally leave on Thursday night, leave Tampa, show up in Europe Friday, play Friday, play Saturday. Fly home either Sunday or Monday, and if I flew home Sunday I'd be back in the studio at 10:00 a.m. on Monday. And it happened weeks in a row. It was way too much coffee consumption and jet-lagging. It's different for the other guys because they just show up and do their parts, but I've got to be there for the entire process. It's one of those things that I learned a lesson from, and that's the main reason that we did it all over in Europe this time. And the next time maybe we'll do it in Europe, maybe we'll do it here...it's too early to tell.

Metal Exiles: The album really has a much darker tone overall than what I've heard from you guys in years, and I think you've even commented on this. Can you explain the motivation behind this musical direction?

Jon Schaffer: Well, the zombie apocalypse theme within the "Something Wicked" universe is really a dark subject. It's taking the zombie apocalypse, which is a subject that can be really corny, because there is a lot of shitty zombie movies, I think, but this takes it to another level of realism and it's fucking evil. So there's real world stuff, there's horror, there's science fiction. It's kind of got all of the elements from the "Something Wicked" universe in there. First Stu [Block, vocals] and I were talking about how we thought it would be cool to do a song based on zombies, because we're all in to watching "The Walking Dead" and stuff. Stu's a zombie movie freak, it's his favorite horror genre. But then my wheels started really turning and I thought we could really take this and come up with an actual story. I didn't have a desire to make it a full album concept or anything, I didn't feel that was necessary, I felt like we could tell the story within four to six songs, and it turns out we were able to do just that. And we already had a few individual tracks that weren't related, but we're really strong. I thought this was a cool way to do something somewhat similar to what RUSH did with "2112", where you have a concept on one side, and individual tracks on the other, and that's really the direction that I went with it. Plus I knew that we we're going to do "Highwayman", or we were at least going to get the music done — whether I could get Russell and Michael to get their vocals done in time, that was another thing — but I wanted to get it done and in the can so that someday when they could do it we could get it out there. And obviously that doesn't fit anywhere in the zombie apocalypse. So I think it creates some cool things for the fans to have this really heavy, dark story and then have these songs that are also really heavy and more of an emotional roller coaster ride that has a lot of different vibes and atmospheres happening on the record. For me, that's always been an important thing in ICED EARTH compositions: to send people on a journey.