A federal court upheld a pre-trial detention order for ICED EARTH guitarist Jon Schaffer in connection with the siege on the U.S. Capitol.

On March 19, U.S. Magistrate Judge Zia Faruqui ordered the 53-year-old musician, who resides in in Edinburgh, Indiana, held without bail on six federal criminal charges related to his alleged involvement with the insurrection at the U.S. Capitol. He ruled that while Schaffer wasn't a flight risk, he does pose a danger to the community.

A short time after the hearing, Schaffer's attorney Marc Victor filed a "motion to amend detention order," claiming that "the government failed to establish Mr. Schaffer's dangerous to the community by clear and convincing evidence."

On March 24, a U.S. magistrate judge filed an "order of detention pending trial" concluding that Schaffer "must be detained pending trial because the Government has proven by clear and convincing evidence that no condition or combination of conditions of release will reasonably assure the safety of any other person and the community."

During the March 19 hearing, government lawyers presented exhibits consisting of a video interview Schaffer gave in November 2020 at a pro-Donald Trump rally expressing his political views and a video and still photos taken on January 6, showing him inside the U.S. Capitol holding "bear spray." Schaffer's attorney argued his client's comments in the video interview — that "if somebody wants to bring violence, I think there's a lot of us here that are ready for it" — were taken out of context, and that he knows he used bad judgment on January 6 and wishes he had a "do-over." He pointed out that the guitarist has no prior record and insisted that he isn't a danger to the community. He also argued the musician was not responsible for the insurrection and was encouraged by former president Donald Trump.

In the March 24 "order of detention pending trial" — obtained by BLABBERMOUTH.NET — the judge wrote: "In response to the Government's exhibit of Mr. Schaffer speaking at a rally in November 2020, Mr. Schaffer argues that he was simply explaining his political views. When asked about violence in the video interview, Mr. Schaffer responded that he didn't want violence, but that he was prepared to meet any violence with self defense. In response to the video that shows him entering the Capitol, Mr. Schaffer argues he was only in the building for 60 seconds and only unholstered the bear spray in question because he thought someone was trying to take it. Mr. Schaffer said he is not a flight risk because he voluntarily contacted his lawyer and surrendered himself. He is a high profile musician so would have difficulty fleeing. He has a stable girlfriend, stable residence, and a daughter. He is 52 years old with no criminal history or substance abuse problems. Mr. Schaffer argues the weight of the evidence is weak, as the Government did not provide evidence that he knowingly entered the Capitol building unlawfully. There was no evidence of violence presented and Mr. Schaffer says he is not affiliated with the 'Oath Keepers.'

"Mr. Schaffer is charged with carrying a dangerous weapon (bear spray) onto restricted, Capitol grounds. His actions on January 6, 2021, during the certification of the electoral college vote, were shocking to the rule of law and the democratic process. As Chief Judge Howell noted in United States v. Barnett, the title of the offense does not 'properly capture the scope of what [the defendant] is accused of doing here.' In this case, there appears to be premeditation and a weapon present. Mr. Schaffer appeared in the video to be one of the first people to breach the Capitol. There is some evidence, and evidence still being developed, that defendant is affiliated with groups that present ongoing threats of danger to the community, e.g., the 'Oath Keepers.'

"The government presented a number of exhibits at the detention hearing that show Mr. Schaffer was in possession of bear spray. There is video of him clearly entering the Capitol and three police officers that appear to fall back in self defense. Thus, it doesn't seem likely or reasonable Mr. Schaffer was under the impression he was 'invited in' by Capitol law enforcement.

"Mr. Schaffer has no criminal history and no documented history of substance abuse. He is employed and has a stable residence. It is true he is within his rights to demonstrate and share his political views through lawful means. This case concerns unlawful means of demonstration. Mr. Schaffer's status as a firearms owner does not have any bearing, negative or positive, on this decision.

"While Mr. Schaffer is most likely not a serious flight risk due to his status as a well-known musician, there remains the concern of danger to the community. Mr. Schaffer's views on the government and current administration are long held. His statements, including the November 2020 interview, show that this was not an isolated event. He has stated there would be 'bloodshed' if the current administration came to power. This transfer of power has taken place, so it cannot be assured Mr. Schaffer will not engage in further violence to support his political ideology if released. The Government alleges Mr. Schaffer is a lifetime member of the 'Oath Keepers,' which is an organization that has questioned the legitimacy of the government and threatened political violence. Last, although Mr. Schaffer claimed he would only respond to violence in self defense, there was no violence directed against him on January 6, 2021, yet he engaged in violent and destructive behavior when he entered the Capitol armed with a weapon." 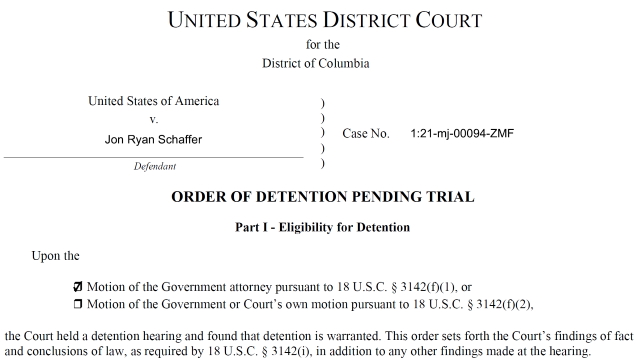