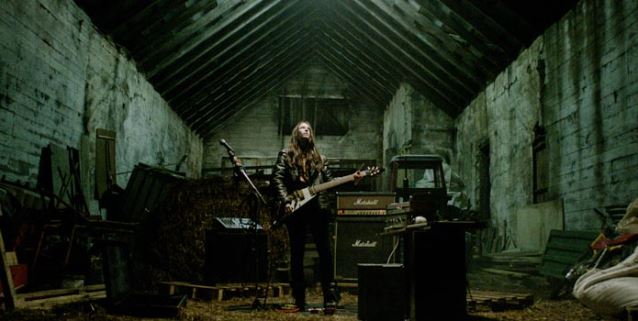 The official trailer for "Metalhead" — with English subtitles — can be seen below.

In a recent interview with Spindle magazine, Ragnar stated about his love of metal: "I bought my first metal album when I was like 10, turning 11, it was IRON MAIDEN's 'The Number Of The Beast'. And the reason is I saw one song on a TV show in Iceland and I'd never heard anything like it. Then I went with my mother past the record store and saw the album cover in the window and I kind of pestered her into buying the album for me. So that's kind of where it started. I spent most of my teenage years collecting heavy metal albums and listening to lots of metal and buying all the metal magazines I could find, and doing that postal thing, going to the post office and writing a cheque and sending it off to London and getting an album back a few weeks or months later. So that was kind of, and still is kind of my hobby; I mean I spent like $400 on records today you know, found a lot of cool obscure metal from the '80s, so I'm still collecting."

Asked what his favorite metal bands are, Ragnar said: "Well, like I said, my first one was IRON MAIDEN, so probably IRON MAIDEN, but I like a lot of bands, especially bands from the '70s and '80s, like JUDAS PRIEST and IRON MAIDEN, BLACK SABBATH, all the originators, MOTÖRHEAD… And then, of course, the big '80s bands like SLAYER, METALLICA, stuff like that, MEGADETH. Yeah, a lot of cool metal bands."