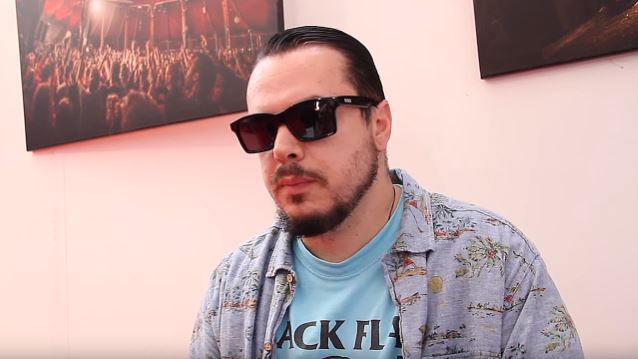 Igor Cavalera (SEPULTURA, CAVALERA CONSPIRACY) spoke to the "Do You Know Jack?" radio show about the "Return To Roots" North American tour with his brother Max Cavalera (guitar, vocals) during which they are celebrating the twentieth anniversary of SEPULTURA's classic album "Roots" by performing the LP in its entirety. You can now listen to the chat below. A couple of excerpts follow (transcribed by BLABBERMOUTH.NET).

On the change in his drumming style on "Roots":

Igor: "That was the thing, especially for me as a drummer, it was always cool to bring some elements of different things. Even on 'Beneath The Remains' and then on 'Arise', I was already trying to push for some more different styles of beats and things like that. And, of course, on 'Chaos A.D.', we went a bit heavier, and then on 'Roots', I think, it's when we completely felt like, wow, this is really a way of trying something new here with mixing up the Brazilian/African rhythms with metal and then hardcore and things like that. So I think it was a cool evolution to get to that point, where I believe on 'Schizophrenia', I was a lot more thinking about playing as a rock drummer, or a metal drummer, and if I look on 'Roots', I was way more looking to having my own style of playing. So those things are really cool. And you can only do that by working hard and trying new things every day as a musician, to find your own style. So it's really cool to see how the whole development became, from the first record to what we do even today when I approach any projects."

On the reaction of SEPULTURA's then-record label, Roadrunner, to the sound of the "Roots" album:

On the KORN influence on "Roots":

Igor: "I think they did [influence us]. Not only them, but them with DEFTONES at the time, they had a particular sound that was quite interesting for us, and that's also one of the reasons that Ross [Robinson, producer] came into the picture — 'cause he could capture that raw sound at that time, and that was really cool. Those bands, they influenced us at the time of 'Roots', but I think there was a lot more going on than just that. So I think it's all part of a whole combination of elements. When we had someone like Carlinhos Brown, a massive percussionist from Brazil, or even someone like Mike Patton [FAITH NO MORE], there's a lot of things going on on the record."

KORN frontman Jonathan Davis recently admitted that he thought the sound of the "Roots" album was too close to his band for comfort. He told Metal Hammer: "One that I thought was a big compliment, but I also thought was fucked up, was SEPULTURA's 'Roots' album. That was just a blatant KORN rip-off, and I had it out with producer Ross Robinson about that, because he just took our sound and gave it to SEPULTURA." He added: "My young brain couldn't handle it. But they were one of our biggest influences, so I guess they get a pass. And that's a classic album, so it's all good."