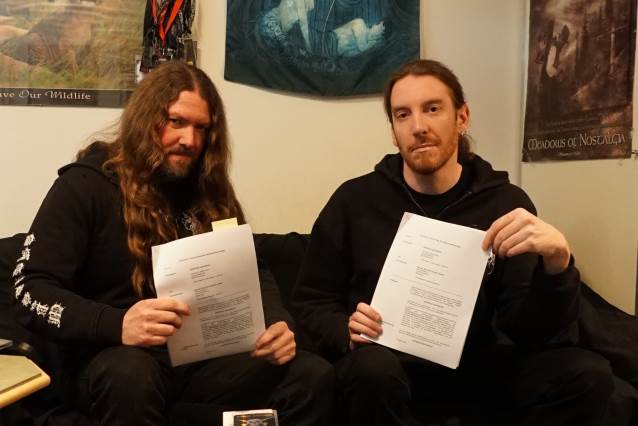 IMPERIUM DEKADENZ Signs With NAPALM RECORDS; New Album Due In 2019

German black metal duo IMPERIUM DEKADENZ has inked a deal with Napalm Records. The band's new album will arrive in 2019.

With a sound that has been described "between old-school black metal and atmospheric post black metal," IMPERIUM DEKADENZ has established its own style over the course of five albums, with the group's latest release, "Dis Manibvs", raising them to the top of the German black metal scene.

Founded in 2004, IMPERIUM DEKADENZ has proved that the Black Forest, where the band hails from, is the perfect source of inspiration for black metal. If you close your eyes while listening to their music, you can almost see yourself on a journey through these dark woody mountains in the South of Germany.

Napalm Records A&R Sebastian Muench commented: "Categorizing IMPERIUM DEKADENZ simply as 'black metal' would, in my mind, be almost an insult. The 2016 released 'Dis Manibvs' is a masterpiece, and, yes, even though it is technically a black metal album, it holds the depth, talent and beauty in the tradition that only EMPYRIUM or the late AGALLOCH can match. I could not be more proud to work with the guys on the upcoming releases!”

IMPERIUM DEKADENZ added: "A new chapter is about to begin! We are excited to announce that we are now a part of the great Napalm Records roster and we feel really inspired to work with such a renowned label. They offer us the perfect surrounding for our next strikes. At the moment, we are working hard on the songs for the new album to be released in 2019. Stay tuned!"