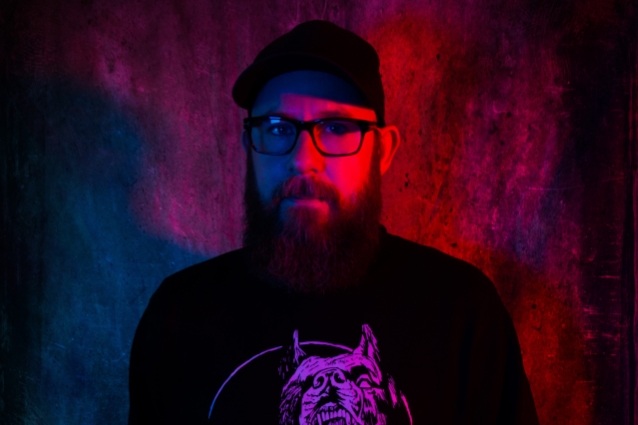 IN FLAMES' ANDERS FRIDÉN: 'I Will Never Go Back And Do Another 'The Jester Race' Or 'Whoracle''

France's United Rock Nations recently conducted an interview with frontman Anders Fridén of Swedish metallers IN FLAMES. You can watch the entire chat below. A few excerpts follow (transcribed by BLABBERMOUTH.NET).

On how he feels about about IN FLAMES' upcoming studio album, "I, The Mask":

Anders: "I have a great feeling every time we release an album. I think that's the way it should be. Otherwise, you're on the wrong track. Honestly, I do feel that every time because we create the music, we record the music, when we feel great, we leave it to the record company and it's out of our hands. Then, we start touring and eventually, we want to have more songs to play live, then we go for the next one. I feel really good. I think this album represents IN FLAMES in the best possible way, how we are right now. It has elements that we are known for: melody, aggression, big choruses and everything."

On how he has evolved as a vocalist:

Anders: "I don't know. I mean, we just want to make good music. I don't really think about the audience at that point when we're writing. It's for us. Yeah, I have to sing something that works with the music. It's always a combination. There are times where, in my head, [I think] 'Let's do this type of vocals.' As soon as the riff starts developing, then maybe that doesn't work or sometimes I am doing a vocal that we need to change the guitars underneath instead because it should fit the vocals. It's always back and forth, back and forth. Don't get me wrong: I love the audience and that's why we're here and able to do this and that's why you are here and why you guys are watching. But, when we create the music, it's for us. We have to be happy. I live and die by the music. That's it."

On whether he agrees with the notion that "I, The Mask" is more guitar-oriented than 2016's "Battles":

Anders: "I agree in many ways. There's equally much as of the electronics, it's just in the production. It's great that you say it's more guitar-oriented. There's as much guitar as on 'Battles', but the production, the mix, it's different. It's sort of the only thing we said prior to the album because we don't have big meetings about what we should do or shouldn't do, we just go with the flow. We said, 'Let's move the guitars a little bit forward in the mix.' Chris Lord-Alge, who mixed it, did a great job. Howard [Benson, producer] and Mike Plotnikoff, the whole team helped us with a great tone and everything. Sure, looking at 'Battles', I think it's as good as it can be. We love it, but it's more laid back compared to 'I, The Mask', for instance."

On the ongoing debate from those who prefer IN FLAMES' original melodic death metal sound to their newer, more modern sound:

Anders: "I hear it when I do interviews, when I get questions, but I don't follow what's going on. Of course, I'm aware, but it's not a debate I have. I mean, I've given up a long time [ago]. I know I can't win. I do what I do and I create music and I have a good time and if people like us, that's great and if they don't, whatever. I can't do anything. If somebody says something, I can't go home to them and knock on their door and try to convince them my way is the right way. No. I will never go back and do another 'The Jester Race' or 'Whoracle' or 'Colony' or 'Clayman'. It wouldn't be right. It wouldn't be true to that album. That album is perfect in every way. If I try to go back 20 years and try to recreate something when I'm in a whole different state of mind, that wouldn't do it justice. It would just only be bad. I love those albums; don't get me wrong. Every single album led up to where we are today. To me, it's totally fine if you like one album or only like one song. At least you like something. I can't do it. This is where we are right now and the way we right music is sort of the same. It's sort of the same mentality. It's all about the melody, all the time."

On the album artwork for "I, The Mask", which re-imagines the band's longtime "Jesterhead" logo/mascot:

Anders: "We all carry masks. You, I, you people out there. We all do for certain situations. A lot of people, there are very few people that are always themselves, all the time. We adapt ourselves to the people around us, to the situation around us. We carry those masks and not show our true inner selves. We might be carrying a black hole inside or we try to pretend like everything is great because we don't dare to explain and sometimes, we don't want to be that boring, sad person that drags everybody down by saying, 'Oh, I'm not feeling good today.' Usually, you wake up and somebody asks and you're, like, 'It's okay.' You're not explaining the whole, 'No, I feel like shit.' I think it's very important that we do open up and we learn about ourselves and learn a way to get out these feelings and create a better — become better people, in general. We all carry those masks to adapt to the situation. The look of the album, it's a story — it's a 'Jesterboy' and he's wearing this mask and you get to see a story, a super-cool story and really nicely done by [artist] Blake Armstrong. We hung out; he's living in Los Angeles and he got to hear the first demos and he was coming up with ideas immediately and we were bouncing ideas back and forth. He did an amazing job. It's this 'Jesterboy' who, he got abused by his dad and so he wanted to [seek] revenge on his dad but accidentally killed his brother while burning down the house his dad was in. To deal with the guilt and everything, he took on his persona of the mask with the jester and he starts fighting demons to deal with everything in his imaginary world. It's the first time we sort of gave the 'Jester' a body, but it's not the 'Jester' you know, it's just using this 'Jester' as a mask to shield himself from the outside and deal with all the bad things and the guilt and the darkness."

"I, The Mask" will be released on March 1 via Nuclear Blast (worldwide, excluding North America) and Eleven Seven Music (North America).