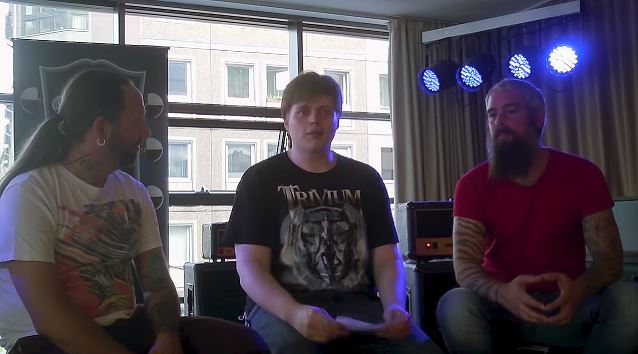 Musiker Board user Chris5150 recently conducted an interview with guitarists Björn Gelotte and Niclas Engelin of Swedish metallers IN FLAMES at the Gibson Showroom in Berlin, Germany. You can now watch the chat below.

IN FLAMES' eleventh album, "Siren Charms", was released in the U.S. on September 9 via Sony/RED. The CD was recorded at Hansa Tonstudios (DAVID BOWIE, DEPECHE MODE, U2) in Berlin, Germany. The cover artwork was created by Blake Armstrong of Space Boy Comics.

In a recent interview with Loudwire, IN FLAMES singer Anders Fridén stated about "Siren Charms", "We just create an album and then it's up for other people to say this or that, but I feel right now we're in a very good place. It was a challenging album to record, because we used half the time we did last time, but at the same time, we went away to a very nice, legendary studio and it's great to be part of that — being there, doing the album in Hansa [in] Berlin. You know, I feel this is where we are today, and we always try to bring everything that we have done with us, but at the same time we want to take our songs further and wider and forward and we never looked to the past and said, 'Oh, this is wrong, now it should be this and or that.' I feel we have everything right now where we are, as people, you know? So, I guess it represents the five members right now in the life, where we are."

Anders also spoke about how conscious he is of the band's musical evolution and making sure a new album develops from the last one in a way that makes sense. "I'm not very conscious while I'm doing it," he admitted. "It's not like I have, you know, this vision, and oh, it's got to be so much different. It's just that now I reflect on the album. Oh, it sounds a bit different. But we just try to push ourselves forward, and probably not do the same thing in the end, because I don't feel that looking back and trying to do the things that we've done again are not right towards those albums, or those songs, whatever. And we are not the same people. We move on in life, and that's how I look at life in general. I just don't dwell on the past. I embrace the future and move forward, hopefully learn from whatever's been going on. I mean, I guess it's important for us to incorporate melody. We want to stay in the metal [genre]. Metal is our home and we want to stay in that scene and run with it, but not do the same thing again and again."