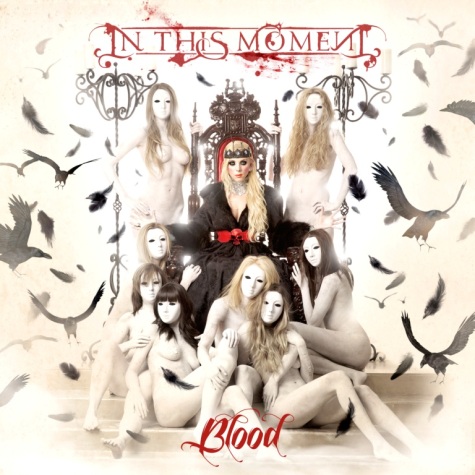 After being one of the most talked-about acts at this year's Rockstar Energy Drink Uproar Festival, IN THIS MOMENT can add another accolade to the list: the top-selling single of all time for longtime label Century Media Records. "Blood", the title track of the Southern Calfornia band's latest album, has sold upwards of 75,000 units since its release a few months ago. The song continues to move an additional 5,000 copies per week and shows no signs of slowing down.

IN THIS MOMENT will embark on a new tour in mid-October. The first set of dates for the explosive quintet will be headlining, while the shows beginning in mid-November will find IN THIS MOMENT supporting HALESTORM.

In radio news, "Blood" is rapidly approaching the Top 10 at Active Rock radio, with stations such as WRIF/Detroit, WJJO/Madison and KQXR/Boise all spinning the album.

"Blood", the album, recently bowed at #15 on The Billboard 200 chart, selling upwards of 20,000 units in its first week. This marked the band's highest album chart debut ever, with nearly double the first-week sales of their previous release, 2010's "A Star Crossed Wasteland".

IN THIS MOMENT began work on the new CD just a few months following the departures of drummer Jeff Fabb and guitarist Blake Bunzel, who left the band late last year in order to join the backing group of "American Idol" finalist James Durbin. Fabb and Bunzel have since been replaced by Tom Hane (THYATEIRA) and Randy Weitzel (FLATLINE, 3/13, AMERICAN MASSACRE),respectively.