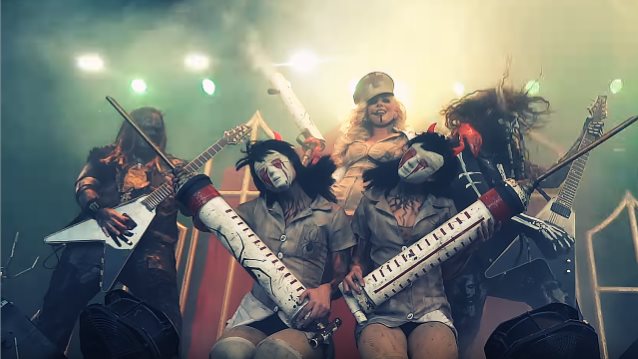 IN THIS MOMENT has completed work on its long-awaited follow-up to 2014's "Black Widow" album for a tentative summer release via Atlantic. The new disc was once again recorded at The Hideout Recording Studio in Las Vegas, Nevada with producer Kevin Churko, who has previously worked with FIVE FINGER DEATH PUNCH, HELLYEAH, PAPA ROACH and DISTURBED.

"We have an album done. It's done," IN THIS MOMENT guitarist Chris Howorth told Cutter of Razor 94.7 and "The Cutting Edge Countdown" (hear audio below). "There's gonna be a single released probably around the 21st of this month… But we have a whole new album ready to go. It's gonna be out over the summer. It's different and cool and I think it's a different step for us but that I think our fans are really gonna like."

Regarding the musical direction of the new IN THIS MOMENT material, Howorth said: "Stylistically, I think we went a little bit more raw, you know — like, not so much campiness like 'Sex Metal Barbie'. Not that there was anything wrong with that — we're always trying to experiment and do something different — but it's more serious, I guess, and a little more stripped down. There's still electronics and stuff, and it's still IN THIS MOMENT, but it's a little more stripped down, I guess, and maybe swampy and bluesy a little bit in certain elements, but still metal, you know, still us."

Chris also talked about the evolution of the IN THIS MOMENT songwriting process and how it has affected the band's new album. He said: "I've learned over the years. At the beginning of the band, it was all about the guitar riffs and the solos and shredding and trying to be metal as we could. I've kind of learned to open up to the song itself and particularly Maria's [Brink] vocal. That's the key selling point of the band, that's what everyone's listening to, so I don't wanna do anything to clutter that. So it's kind of like the guitars are there, but they're not there to be in the forefront; they're there to support the whole song. And that's what most of the new stuff is. But it's still guitar driven. That's IN THIS MOMENT."

IN THIS MOMENT kicked off the "Half God Half Devil" North American tour on April 7 at Milwaukee, Wisconsin's Eagles Ballroom. Support on the trek is coming from MOTIONLESS IN WHITE, AVATAR and GEMINI SYNDROME.

Howorth revealed last summer that he was diagnosed with acute arthritis in his neck and shoulders. His diagnosis came less than two months after IN THIS MOMENT was forced to cancel its European tour due to what was described at the time as an injury to Howorth's neck.

After receiving his diagnosis, Howorth said that he has accepted the fact that he will have to learn to live with the arthritis but insisted that he is "determined to continue writing and performing with my band."

Howorth co-founded IN THIS MOMENT with Brink over a decade ago. The pair remain the band's only original members.

Brink ruled out the possibility of IN THIS MOMENT touring with a replacement guitarist, calling Howorth "my partner, brother and one of my closest friends. I can't bring myself to do this tour without him. It simply would not be IN THIS MOMENT."

Listen to "Episode 10: In This Moment's Chris Howorth" on Spreaker.
Find more on In this moment