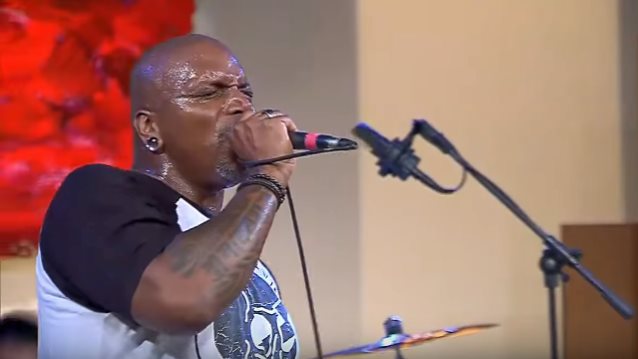 On April 2, Brazilian/American metallers SEPULTURA took part in an interview and live performance at the studios of "Metrópolis", the Brazilian show from TV Cultura. You can now watch video footage of their appearance below.

SEPULTURA guitarist Andreas Kisser recently revealed that the band is planning to embark on a special tour of Europe featuring groups with Latin connections.

Although the initial plan was to stage the trek in late 2017, it now appears that the tour will take place several months later.

"I don't know if I can talk too much about [our plans for this special tour], because we're just starting to put together some ideas, but we finally wanted to do something more Brazilian and Latin, trying to bring Brazilian bands to tour in Europe," Kisser told WSOU. "But let's see what happens. I think the possibilities are great. We have great possibilities for a really nice package — not only in Brazil, but then from Argentina and even the States that have Latin connections and heritage. That would be cool — something that we never really were able to put together. And it's kind of like an old dream. As a matter of fact, many bands really demand some kind of stuff like that. Some bands really felt that we could make a little more effort to bring them out, to take them out to Europe and the States and stuff. And I think now finally we get in this position and the situation that we are organized enough to do something like that and the momentum, I think, it's great. So I think early 2018, we're gonna start doing something like that in Europe and hopefully we can take that everywhere. It would be great."