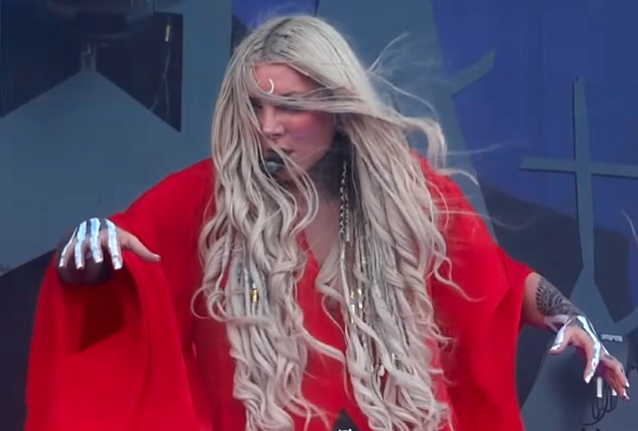 IN THIS MOMENT's MARIA BRINK On Dealing With Coronavirus Pandemic: 'Everyday Things Are Becoming A Gift'

IN THIS MOMENT frontwoman Maria Brink spoke to Meltdown of Detroit's WRIF radio station about how she is dealing with the coronavirus crisis. She said: "I'm trying to work on music now, because I'm starting to realize that… I'm a very private person; I don't really do live streaming. But I'm really like a private, hide-behind-the-scenes-type person, but I think having to have all us adjust to this new world we're living in, I'm figuring it out — how to be a technical, livestreaming person, and kind of bring my fans into my world and let them connect with me without having to be on tour. I think we have no choice but to do this at this point if we wanna stay connected. And I think it it really important to stay connected to all of our fans. 'Cause it's like a little universe that you create and you build. And if they can't get the music and see us live, they need something else. So that's something. And I actually have time to fill my house with plants; my house is a jungle right now, and that makes me happy. The things that I don't always get to have time for, I'm having the time for. And most importantly, family. I'm having such amazing family time, which is the most important thing of all."

According to Brink, the pandemic has changed everybody's perspective on life. "Because, for a minute there, I was, like, 'We're all gonna die,'" she said. "In the beginning, we were all terrified. So I think everyday things are becoming a gift, and we should all look at life like that. Life is a gift, and you can die any day. Any one us can die. Nothing's guaranteed. And things that we don't even think of are gifts sometimes — like our healthy lungs, our eyes, our feet. Everything. So I think that this is really making everybody in general appreciate their family more, their careers more, going out to a restaurant. The movie theater — how exciting will the movie theaters be when you can go back to a movie theater?"

IN THIS MOMENT's latest album, "Mother", came out in March. Recorded, once again, at The Hideout Recording Studio in Las Vegas, Nevada with producer Kevin Churko, the disc contains three covers, including the STEVE MILLER BAND's "Fly Like An Eagle" and QUEEN's "We Will Rock You", which features vocal backup from HALESTORM's Lzzy Hale and THE PRETTY RECKLESS's Taylor Momsen.