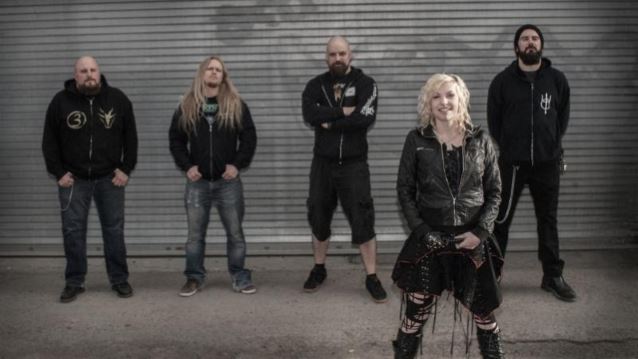 INTO ETERNITY Signs With KOLONY RECORDS

Said INTO ETERNITY in a statement: "At long last, we have some good news for you all! Our new album, 'Sirens', is completely finished and we couldn't be happier with the results.

"We're pleased to announce INTO ETERNITY has inked a new record contract with Kolony Records! Thanks to Mr. Lorenzo Marchello for signing our band. Thank you to Joann, Amanda and the staff at Extreme Management Group for hammering out this new record deal for us. Thank you to our booking agent Rock the Nation U.S.A. for your support.

"With these new compositions, fans can expect to go on an epic journey of music and vocal melodies intertwined with aggression. Some of our very best moments and melodies are going to be represented on this new record. We are excited for our friends and fans to hear it!"

"Here at Kolony Records, we're extremely excited about the signing of INTO ETERNITY. I've been a fan of the band for many years now," added label owner Lorenzo Marchello. "Kolony Records is a young label, but we have already launched several top-quality newcomer bands like BE'LAKOR, PERSEFONE and SECRETS OF THE SKY. INTO ETERNITY is the biggest band we have on our roster, and we're sure we can give them that day-to-day kind of collaboration they are looking for. We can't wait to start working on the band's new album release!"

One of the most critically acclaimed bands in metal and undoubtedly one of its hardest-working, INTO ETERNITY borrows from all aspects of heavy music to form the perfect blend of technicality, memorable songwriting, traditional heavy metal and the sheer savagery of metal's extreme genres.

Founded in Regina, Saskatchewan by guitarist Tim Roth in the late '90s, INTO ETERNITY seamlessly melds the seemingly disparate worlds of extreme metal, hooky hard rock and challenging progressive music. Metal fans around the globe have hailed the technical prowess displayed on such albums as DEAD OR DREAMING, BURIED IN OBLIVION and THE SCATTERING OF ASHES, as well as the virtuosity displayed during tours with the likes of MEGADETH, DREAM THEATER, LAMB OF GOD, OPETH, SYMPHONY X and ICED EARTH.

INTO ETERNITY continues to be in demand at high-profile festivals around the world, and will be actively touring worldwide in support of its upcoming 2015 release.