The trek will now kick off on June 5 at St Jakobshalle in Basel, Switzerland and hit Arena in Zagreb, Croatia on June 7 and Grouparama Arena in Budapest, Hungary on June 9. LORD OF THE LOST will serve as the support act at these shows. The fourth and final extra show will take place on July 6 at Deutsche Bank Park in Frankfurt, Germany, with SABATON and AIRBOURNE as support. AVATAR and LORD OF THE LOST will support at Sportpaleis in Antwerp, Belgium on June 27 and AMON AMARTH and AIRBOURNE will open at the Gelredome in Arnhem, Netherlands on July 10.

This completes the "Legacy Of The Beast" summer 2021 touring schedule and no further dates will be added. As always, there will be an exclusive pre-sale for IRON MAIDEN fan club members at the appropriate time.

As previously reported, BMG will release IRON MAIDEN's new double live album on November 20. Containing over 100 minutes of classic MAIDEN music and available in multiple formats, including a limited edition Mexican Flag, triple colored (180g) vinyl and a limited-edition deluxe two-CD book format, "Nights Of The Dead, Legacy Of The Beast: Live In Mexico City" was recorded during the band's three sold-out arena shows there in September 2019 and is a celebration of their "Legacy Of The Beast" world tour which began in 2018 and will finish next summer in Europe. 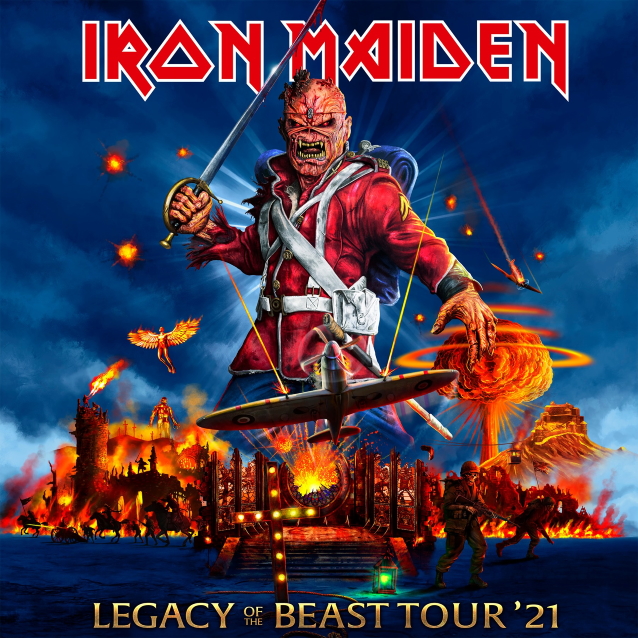