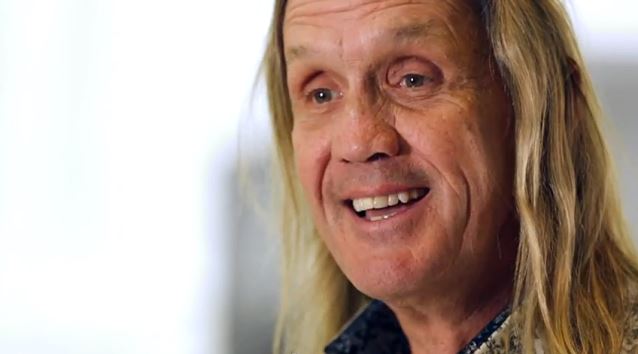 Charlie Steffens of KNAC.COM recently conducted an interview with IRON MAIDEN drummer Nicko McBrain. A couple of excerpts from the chat follow below.

KNAC.COM: On this tour you're playing the quintessential IRON MAIDEN songs, right?

McBrain: Yeah, we dusted off the cobwebs off of a few that haven't had a showing for a while. Well, it's been twenty five years since we've played "Seventh Son Of A Seventh Son", so you could say there's that one song and that's it. We pulled out "Trooper". The last airing of that, I think, was eight, nine years ago. "Phantom Of The Opera". Classic. We did "Can I Play with Madness" not so long ago. Yeah, those classics right there. We've got "Afraid To Shoot Strangers", that's always a great crowd pleaser. "The Prisoner". I love that track. It's just a wild song to play. It's got a great groove to it. It's the third song in the set. It's so lovely to be revisiting some of the older stuff as well as that mid-'80s period. People think, "Yeah, you're doing the 'Seventh Son Of A Seventh Son' tour," if you like. But it's a retrospective look at MAIDEN. You still get the classics: "Number Of The Beast" and "Iron Maiden" always closes the show. We've left out "Hallowed Be Thy Name" just because we've always played "Hallowed" every tour, although, it's one of my favorite songs, ever, to play with MAIDEN. So we're doing a fair chunk of "Seventh Son", but we've got before and after. "Fear Of The Dark", for instance. "Afraid To Shoot Strangers". Yeah, we're really having a good time, mate. It went well for last year in Europe. It most definitely was received so very well in Raleigh the other night. People loved it, and we all came offstage with a smile on our face. You can't not come off with a smile when you see how many people enjoyed themselves, you know.

KNAC.COM: Are you cruising around in the jet for this tour?

McBrain: No. In a way it would have been nice, but because this leg is just a couple months, or, actually, it's only four weeks really — it was too cost-prohibitive to a 757 just to do a month out on the tour. That's kind of the world jet, when we do around the world in a couple of months. You're self-contained on it. You've got all the gear. You've got 12 tons of gear and all the crew. Mind you, we got a lot of beer now. [laughs]

McBrain: Exactly. It's funny, you know. When we were in rehearsals last week, we got to "The Trooper" in the set and before I kicked it off I started out, "All right lads, I think it's time for a beer." And they all looked at me and went, "What?" And I said, "It's Trooper time, isn't it?" We don't drink while we play and we don't drink before. At the very end of a night, we've been known to take a pint of Guinness, if we're in Ireland, and toast the audience with it. But that's at the end of the night. But yes, this Trooper beer, my lord, it's so, so delicious. It's wonderful. For any ale drinkers out there that love to drink a drop of beer. It's not a lager. It's like a bitter, extra special bitter, like an ESB. It was designed with Robinsons Brewery and Bruce [Dickinson] actually had a big hand in the design of the beer. When I first joined MAIDEN in 1982, I went out on tour with the band before Bruce. I was supporting the band when I was in TRUST, I went out on the "Killers" tour. All of us then drank ale across the British tour and we all loved our real ale beer in England. So Bruce knew what we wanted to taste in a beer, basically. So with that in the back of his mind, he went in and designed this beer. If you took IRON MAIDEN's logo and Eddie off the bottle and had a blindfold test — if you like beer — it's really, really good. It's not just IRON MAIDEN selling this beer with our names on it, although a lot of our fans are going to want to buy it because it's a fantastic bottle. It's a good souvenir, isn't it? But it's a great drop of beer, mate. My preference, by the way, Charlie, is I like it warm. When I say warm, I mean room temperature, not Florida room temperature because that would be 90-odd degrees. [laughs] But it's funny, because Bruce and Steve [Harris, bass] — out of the bottle — they like it cold. But when you have it out of the cask, you know, the way it's really brewed to be drank, it should be at room temperature or cellar temperature, which can be anywhere from 57 to 62, 65 degrees. When it's warmer it has a more firmer taste. It really opens up. There's a plus and a minus. Some people say, "I prefer it cold and not warm," and vice versa… I've got to be honest with you — I live in Florida — I like ice cold Corona beers, you know. When you go from the hot — outdoors hot — you say, "Oh, I could murder a cold beer." You do. You'll have some and you'll kind of chug it. Trooper beer — you can't really chug it, even when it's cold. But the thing is, if you sit down and you kind of take a minute, and you go, "I really want a really tasty beer. I don't want something to quench me thirst. I'll take it warm." And I love my customers in me restaurant in Florida. I actually introduced it there two weeks ago. I was fortunate to actually open the first commercial bottle of beer in America on the Monday. I forget the date of it now. I figure it was the 10th or 12th, oh, anyway. On the next day we had this big launch for the beer and all these folks who came in were having it cold, first of all. Then I passed bottles around and gave them tastes of the room temperature or warm beer. And a lot of the folks said to me, "You know what? We're American. We don't like warm beer." I said, "Just try this. Just for me. Try it and let me know what you think." Ninety-six percent of the people turned around and said, "The next bottle of beer I'm going to buy in this place is going to be the one that is room temperature. It's got much more of a fuller taste and I never would have thought I would have liked a warm beer." So you know, horses for courses, Charlie, end of the day, mate.

Read the entire interview at KNAC.COM.