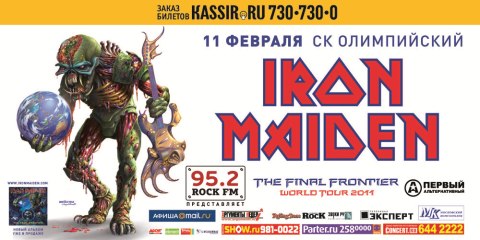 Check out photos of the concert at Headbanger.ru.

IRON MAIDEN's latest album, "The Final Frontier", sold 63,000 copies in the United States in its first week of release to enter The Billboard 200 chart at position No. 4.

"The Final Frontier" was released in North America on August 17. 2010 via Universal Music Enterprises (UMe). The effort was made available in a unique limited-edition collectors' "Mission Edition" CD case and features access to extra bonus content, including the director's cut of a video for the edited version of the opening song on the album, entitled "Satellite 15... The Final Frontier"; band "Mission Debrief" interview footage; wallpapers; photos; and the exclusive game "Mission II : Rescue & Revenge". MAIDEN is also for the first time making the album available as an iTunes LP with bonus content as well as the traditional digital format. There is also a limited-edition double picture disc.

The band reunited with long-time MAIDEN producer Kevin "Caveman" Shirley in early 2010 at Compass Point Studios, Nassau to record the album and then moved to The Cave Studios in Malibu, California to finish the recording and do the mixing. Compass Point Studio is very familiar to the band, it was where they recorded the "Piece Of Mind" (1983),"Powerslave" (1984) and "Somewhere In Time" (1986) albums.