"If you weren't able to make it to the SXSW film festival on Wednesday [March 18], we've got good news — 'Flight 666' will be showing again! Saturday 21st March at Austin Convention Center, 500 E Cesar Chavez, Austin, Texas. Tickets are $10 and go on sale just before the film starts at 2:00 p.m. — strictly first-come, first-served."

For "Iron Maiden: Flight 666" — the feature-length documentary film which follows the IRON MAIDEN bandmembers on the first leg of their "Somewhere Back In Time World Tour" in February and March of 2008 —
the band was accompanied everywhere by award-winning documentary makers Banger Productions from Toronto in Canada, who have received international critical acclaim for their previous movies "Metal: A Headbanger's Journey" and recently "Global Metal". Producer/presenter Sam Dunn and his team bring an intimate, behind-the-scenes view of this remarkable journey, with a close look at the logistics involved and following Team Maiden in the cockpit, on the plane and on and offstage, getting to the heart of this global adventure of a band that has very rarely even let cameras backstage before.

Shot in high definition and with superb 5.1 surround sound, mixed by the band's producer Kevin "Caveman" Shirley, "Flight 666" brings to the screen all the drama, excitement and hysteria that followed the band around the world every time Ed Force One (the band's plane) touched down in a new country. The film documents the intensity of the punishing show schedules, the struggle with the time zones, the pressures of ensuring that every performance matched the energy of the many thousands of ecstatic and expectant fans from many cultural backgrounds, unusual angles from the spectacular shows... and, of course, the fun had on the way!

A special international "Iron Maiden Day" is being planned for April 21 with simultaneous showings of "Iron Maiden: Flight 666" in selected digital cinemas around the world.

Read a review of the film from the Toronto Star. 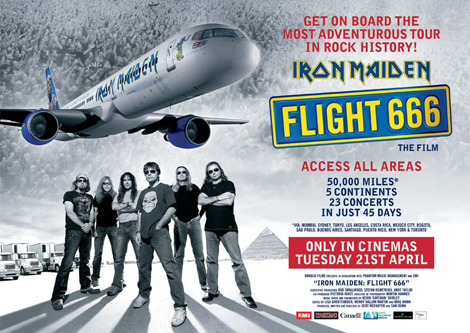