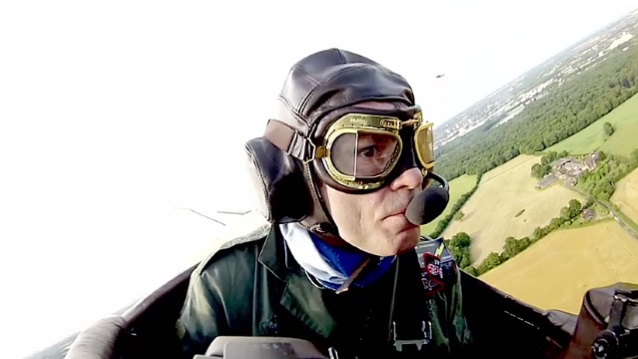 Cardiff Aviation, a large service and maintenance facility in St. Athan, Wales, United Kingdom whose chairman is IRON MAIDEN singer Bruce Dickinson, has announced on the first day of the Paris Air Show, June 15, that it is launching a brand new ACMI airline. The move is the next stage of a phenomenal expansion for the South Wales-based MRO and training business.

The new airline, operating under the VVB brand, is in the process of acquiring an EASA operating license. The first aircraft to join the airline will be a 737-400 which will go straight into ACMI operations.

Cardiff Aviation is also providing pilots and cabin crew to support the aircraft, with MRO work to be carried out at the company’s military-grade facilities at St. Athan in South Wales.

At least two additional aircraft are expected before the end of Q3 2015 driving further crew and aircraft acquisition.

Dickinson says: "In the last two years, we've grown relentlessly, thanks to our unique entrepreneurial style of MRO and training. We're now looking to bring that approach to the airline market with VVB. This is a huge opportunity to create new jobs and further increase our already impressive roster of services."

The new airline is the first stage in Cardiff Aviation's plan to develop a revolutionary new approach to aviation, which will allow corporations and countries to quickly set up airlines with EASA-class compliance and capability. The airline's operational management is to be supported by Centrik, the cloud-based operational management software from Total AOC, who are also handling all AOC type approvals to enable the airline to take off.

Dickinson adds: "If you are looking to establish an airline, we will do all of the procurement, technical execution and administration on your behalf. We can give you a one-stop 'airline in a box' — all you need to do is sell the tickets, and we'll do the rest."

Cardiff Aviation has already begun the process of establishing other airlines, with an MoU recently signed with Air Djibouti to create a new national carrier for the African country.