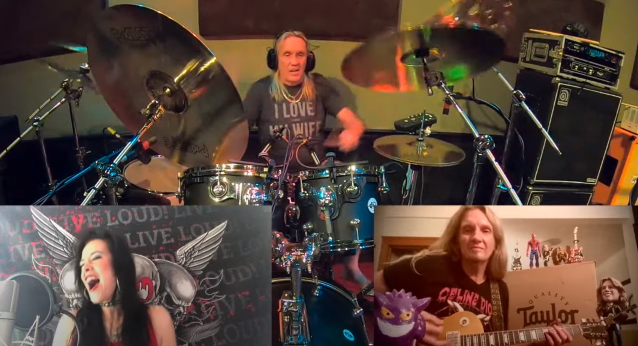 As part of her "One-Minute Jam" video series on YouTube, EVANESCENCE guitarist Jen Majura has teamed up with IRON MAIDEN drummer Nicko McBrain and WHITESNAKE guitarist Joel Hoekstra to record a cover version of "Live And Let Die", originally written by Sir Paul McCartney for the 1973 James Bond film of the same name, and performed by WINGS.

In a statement accompanying the release of the video, Majura wrote: "Please give it up for this week's phenomenal 1min jammers: IRON MAIDEN's very own Nicko McBrain on drums and WHITESNAKE's Joel Hoekstra on guitar! We gathered digitally to jam the ultimate '73 classic 'Live and let die' for you - hope you'll enjoy!"

In an interview with Metal Temple, Majura stated about her songwriting approach on "InZENity": "For 'InZENity', I swore to myself to make no compromises at all, which is the major difference [between the two albums]. 'Cause with my first album I tried to sound like I want to sound as well as I thought how people would expect me to sound. Horrible idea. When I made the decision to finally record the songs for 'InZENity', things were different. No one could tell [me] what I can do or what I cannot do. One instrumental track, an acoustic track and crazy prog hard rock with jazz as well as metal elements… Not possible? Possible, and 'InZENity' is the evidence."

This past Friday, EVANESCENCE released a new single called "Use My Voice" via Sony. The song follows "Wasted On You" and "The Game Is Over" as the third track to be released from "The Bitter Truth", EVANESCENCE's forthcoming album, and its first containing all-new material in nearly a decade.