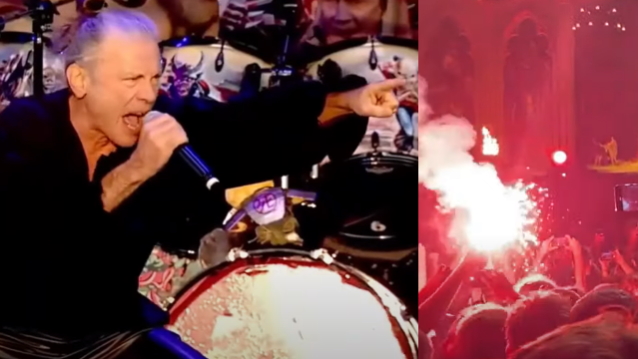 IRON MAIDEN singer Bruce Dickinson blasted a fan as a "Greek cunt" and a "fucking cocksucker" for lighting a flare during the band's concert Saturday night (July 16) in Athens, Greece.

The incident occurred as MAIDEN launched into the tenth song of its set, "The Number Of The Beast", at the Olympic Stadium. After singing the opening line of the track, Bruce noticed the flare lighting up and immediately burst into an angry rant, apparently concerned that the smoke from the flare would negatively affect his singing voice.

"The cunt with the fucking flare, I've gotta sing up here," Bruce shouted into the microphone. "You fucking cocksucker. You Greek cunt. All right. I've gotta fucking sing. All right. Fuck you."

As Bruce's bandmates continued playing the opening riff of "The Number Of The Beast", he apparently briefly left the stage in hopes that the smoke would clear up. However, when Dickinson eventually resumed singing the song, he was notably off time and not in sync with the rest of the group.

Dickinson has a history of publicly admonishing fans and security at MAIDEN's concert if he feels like they are out of line. Back in 2019, he stopped a MAIDEN show midway through to slam a Tacoma, Washington venue for a violent and bloody incident in the crowd for which he claimed the venue's security was to blame. In 2012, Bruce called out a fan at a Indianapolis show who had been texting for three straight songs.

MAIDEN is continuing to tour in support of its latest album, "Senjutsu", which came out last September. It marks MAIDEN's second consecutive double album behind 2015's "The Book Of Souls" which is the longest MAIDEN album, with a running time of 92 minutes. 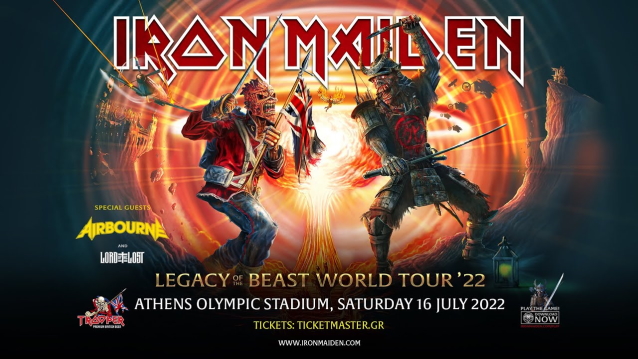