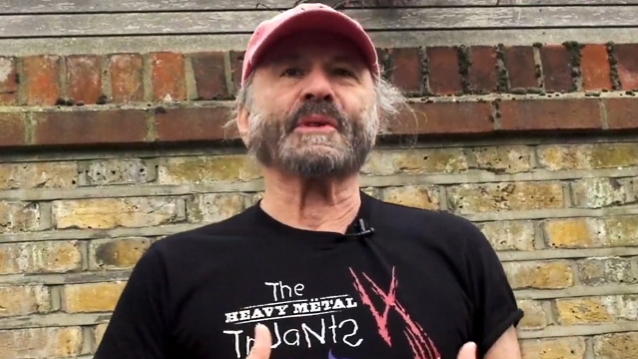 The Heavy Metal Truants have announced that IRON MAIDEN singer Bruce Dickinson will be taking to the saddle and joining them on their annual quest to raise funds for disadvantaged children, a cause even more essential in a prolonged period when charities are suffering so badly.

This marks the ninth annual Heavy Metal Truants fundraising adventure. Traditionally (and primarily) a cycle ride which starts in London and proceeds for 175 miles over two and a half days to the hallowed heavy metal grounds of Donington and Download festival, it typically comprises around 40 riders cycling to the festival. They are sponsored by friends, family, colleagues, employers and acquaintances to raise money for these deserving causes.

However, with the cancellation of last year's Download festival, which was due to be headlined by IRON MAIDEN, the Heavy Metal Truants went both international and virtual to make it their biggest ever year with over 400 riders from 35 countries signing up to cycle on indoor trainers of any kind or around their local area. They raised over £200,000, taking the amount donated by Heavy Metal Truants to the charities to date to over £888,000.

With Download again being canceled this year, and MAIDEN's own touring plans put on hold, Dickinson is joining with fans, other bands and members of the music community to make it their biggest-ever — and widest-ranging — fundraising event. The Heavy Metal Truants will be very proud when this ride takes the total raised to over that magic £1,000,000 mark.

Bruce reveals: "The cat's out of the bag — I'm joining the Heavy Metal Truants to help raise money for these heroic children's charities. With touring out the window once again, there's no good reason why I couldn't sign on at last and no good reason why you can't either! I'm calling on all fans, bands and people who work behind the scenes to join me on the virtual road to Download. Every single penny counts for these charities who've been hit hard by the pandemic, so no matter how much, or how little, you raise, by joining us you will make a difference in a child's life. Sign up today!"

To make this challenge accessible to more people the event is expanding even further this year, welcoming non-cycling participants to set a new fund-raising record across a range of activities and abilities. So they are inviting walkers, runners, hikers, rowers and more to join Bruce and his fellow Heavy Metal Truants to complete a physical challenge anywhere from 35 miles by foot all the way up to 1,000 miles by bike within the 12-day period.

Founded in 2012 by MAIDEN manager Rod Smallwood and ex-Metal Hammer magazine editor-in-chief Alexander Milas, the Heavy Metal Truants have seen tremendous support from the music industry over the years. From Download promoter Andy Copping and John Giddings who runs Isle Of Wight festival, to musicians from bands including SAXON, TRIVIUM, PARADISE LOST and more they have all joined fans to put on the lycra and pedal the miles. The 2017 event was even waved off from Alexandra Palace by the one and only Brian Blessed!

To help raise even more for the kids the Heavy Metal Truants have also run auctions including memorabilia personally donated by QUEEN, METALLICA, KISS, BON JOVI, MAIDEN and many more, alongside spoken-word events with legends of the heavy rock scene and even Heavy Metal Curry Nights.

It begins on May 24 and concludes on June 4, which would have been the first day of this year's Download festival. The event is open to anyone who wishes to sign up and raise funds for Save The Children, Teenage Cancer Trust, Nordoff Robbins and NSPCC/Childline by completing a designated sponsored challenge.

If you are unable to join the ride but would like to make a donation, please go to: SportsGiving - Donate to HMT 2021: Nine Lives - Virtual Challenge

The Heavy Metal Truants is part of The Truants Foundation, which has raised over £4 million for children's charities over the past 10 years. It became a registered charity: No. 1191441 in November 2020. 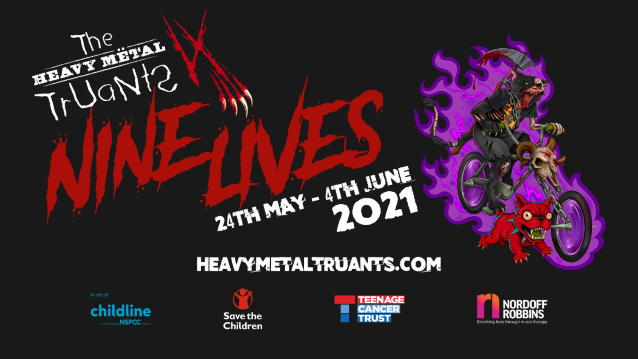