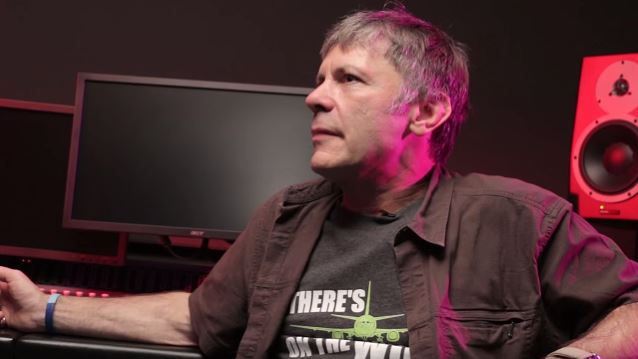 In a brand new interview with Corus Radio, IRON MAIDEN singer Bruce Dickinson was asked about pop superstar Lady Gaga's recent comment that she would rather be called the next IRON MAIDEN than be compared to pop veteran Madonna.

"I think she's great, and I agree with her: she's not the next Madonna; she's way better than that," Dickinson said (see video below). "'Cause, first of all, she can sing — she's got a belter of a voice — [and] she's a really good instrumentalist. And, I mean, she's got a great sense of drama. And anybody that could turn up to an awards ceremony dressed as a bacon sandwich gets my vote. I mean, she's great."

Dickinson also talked about IRON MAIDEN's enduring appeal, driven by the loyalty of its rabid fan base.

"We've tried not to let [the fans] down," he said. "I mean, that's all you can do is try — 'cause, obviously, you can't please everybody all the time. But the way we do that is by not letting ourselves down. 'Cause I think fans — certainly our fans — probably accept that they're always gonna be going on a bit of a journey with you, and they're perfectly at liberty to get off the bus if they don't like the way it's going and rejoin it at some later date [laughs], or find a bus stop down the road ten years ago, and, 'That's where I like to hang out.' But if you stay with it, at least there's a degree of integrity with what we're doing."

He continued: "We've never done things to court anybody else except what we thought was musically valid. And we've never been about fashion and dressing up and going out with supermodels and doing kiss-and-tell biographies and making movies of our willies and posting them and all that kind of rubbish that people do. It's always been about music, and it's always been about music and connecting with people live. And I stress the 'connecting' bit. It's about making real connections — not having a million followers on Twitter."

Speaking to CR Fashion Book magazine, Lady Gaga stated about IRON MAIDEN: "They're one of the greatest rock bands in history, in my opinion. Some people really don't know the importance of metal and the scope of it. Those guys were filling stadiums, and they still are. And it's because of the culture of the music, the poetry that's so powerful, that whenever the fans come together, they unite in the essence of what IRON MAIDEN is all about. I always used to say to people, when they would say, 'Oh, she's the next Madonna.' No, I'm the next IRON MAIDEN."

Gaga graced the cover of a recent issue of CR Fashion Book, which arrived on newsstands on September 3. The publication contained photos of Gaga in two different wedding dresses, including a goth-punk black piece underneath which she is wearing an IRON MAIDEN "The Number Of The Beast" t-shirt.