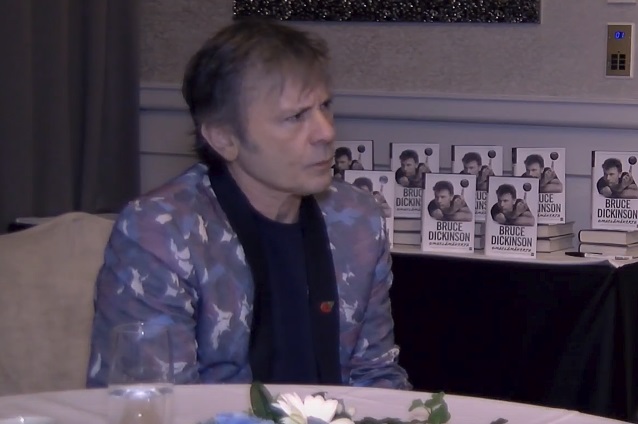 IRON MAIDEN's BRUCE DICKINSON On His Stage Outfits: 'I Am Proud To Have Been Ridiculous'

During a recent interview with Finland's Radio Rock, IRON MAIDEN singer Bruce Dickinson spoke about his penchant for wearing outrageous outfits during the band's live performances. Asked if there is a costume that he has sported on stage that he looks back on in embarrassment now, Bruce said: "'Embarrassment' is not the word I would use. 'Cause 'embarrassment' sounds like you're not proud of it. I am proud to have been ridiculous."

Pressed about what his favorite piece of attire is out of all the outfits he has worn over the years, Dickinson said: "I think possibly the most ambitiously ludicrous was the 'Somewhere In Time'costume, which the description of that that I gave to the lady who was designing it was, 'Imagine a planet that was occupied by giant green space lizards. So we shoot a giant green space lizard, skin it, make a pair of trousers out of it. But the top half is kind of a space d'Artagnan, so we wanted a puffy shirt, like a sort of a Louis XIV-era musketeer. And then on top of it, we have an exploding jacket with a giant beating heart and rope lights.' And she just nodded at me and went, 'Okay,' and went away. And I think she thought I was completely mad. And there may have been some truth in that."