IRON MAIDEN vocalist Bruce Dickinson recently spoke with Australia's Heavy magazine about his upcoming speaking tour of the country. The full conversation can be streamed below. A few excerpts follow (as transcribed by BLABBERMOUTH.NET).

On what to expect from his upcoming Australian speaking tour:

Bruce: "Basically, it's me. [Laughs] You get me, and you get to throw rotten tomatoes at me, or whatever the hell it is you want to throw. It's about an hour-and-a-half show. It's kind of variable — if we really get stuck into it, it could be a lot longer. It depends on how long people want it to be, to be honest. I do probably about 45-50 minutes or so talking about the book [his recently published autobiography, 'What Does This Button Do?'], about life, the universe in general. I've got some pictures which we put up there, basically so I can kind of riff and tell stories about episodes of my life. I can expand a fair bit on things — stories that aren't in the book, all kinds of other stuff. Then I invite the audience to scribble down some questions on some cue cards. One of my missions every day is to sign 1,000 books before each show, so everybody that turns up gets a signed book. The Q&A part of it, there's a little interval where people go off and drink non-alcoholic water or alcoholic water if they wish, and come back with a new attitude on life. They come back in and I kind of rearrange the cue cards almost into sort of an improv script. That's how I do the questions. That can go on for a while. It depends on how good the questions are. People can heckle or do whatever the hell they want. It's their show as much as it is my show."

On whether fans should avoid asking him any specific questions:

Bruce: "No. It's what you like — that's the whole point. This is full-on warts and all. They may be surprised at some of the questions that some people ask. I'm hopefully surprised at the questions that some people ask. I've had some brilliant ones that really sort of made you sit back and think. We're looking for some questions with a bit of meat to them — something that makes people sit back and go, 'Ooh, that was kind of left field. Where did that come from?' Those are the kind of questions I like. People can get as deep and meaningful as they want to be. Sometimes I get deep and meaningful by mistake anyway. I'd love to say the whole thing is scripted. It's not. In that sense, it's a little bit risky and a little bit edgy, and that's the way I like it."

On whether he has to adjust his "British-isms" when addressing different pockets of his global fan base:

Bruce: "No, absolutely not. The sense of humor, funnily enough, is very similar. Everybody up here [in Finland, where Dickinson was when he conducted the interview] speaks very good English, and certainly, if you go to Norway, you'd discover that people were pretty much brought up on 'Monty Python'. The sense of humor is very, very similar, and they all speak really good English. I mean, you have to be conscious on occasions — there are some things that I suppose might not translate — but I'm talking to people. When you're talking to people, then you can use an awful lot of body language [so] that people get what you're talking about. It's not me standing reading from an autocue [or] a lecture. It's more like stand-up comedy or improv for about an hour and a half."

On being able to effectively work a crowd:

Bruce: "While you're in that experience, it's a very intense experience, because you're in the business of energy management, I suppose. Most things in life are actually about energy management, and there's a tremendous amount of energy in a crowd, because there's all those people and all that emotional energy flying around of however many thousand people all looking at the stage with an expectation, going, 'Wow, I just want this to be so great.' It's going to sound a little bit odd and a little bit ridiculously semi-mystical, but you can actually feel the energy, and you can pull it into yourself and you can redirect it and reflect it back at the crowd. When you do that, that's when you get that moment. You can feel their attention, and you give them the attention back, because you can't walk away with the attention of 50,000 people hanging around your neck at the end of the show. If you did that every night, you'd go mad, so you try and get rid of it all at the end. It's a bit like charging yourself up from a big Van der Graaff generator — you need to let go of the spark at the end so you're not still walking around with 10 million volts surrounding your body. On a smaller scale, when you're doing a one-man show, although it's a theater and it's obviously quieter, there's still that same build-up of energy. It's more intimate, but nevertheless, it's the same thing — you're feeling the energy from people and you're giving it back to them, and you're kind of reading the audience with your subconscious."

Dickinson — who recently celebrated his 60th birthday during an IRON MAIDEN concert in Birmingham, England — will kick off a five-date speaking tour of Australia on October 18 at the Enmore Theatre in Sydney.

"What Does This Button Do?" landed at No. 10 on the New York Times "Hardcover Nonfiction" best sellers list. It was released in the U.S. on October 31, 2017 via Dey Street Books (formerly It Books),an imprint of HarperCollins Publishers. 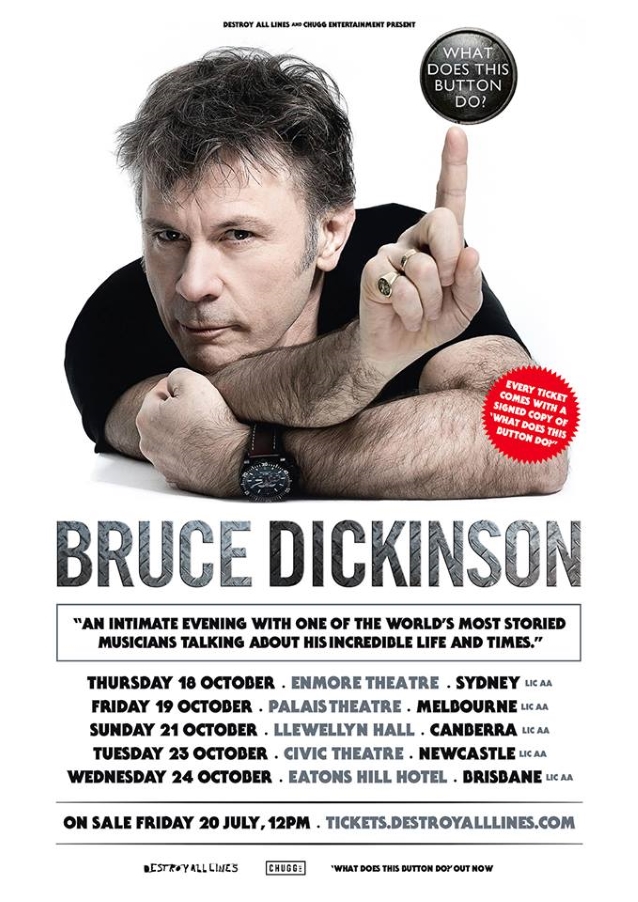