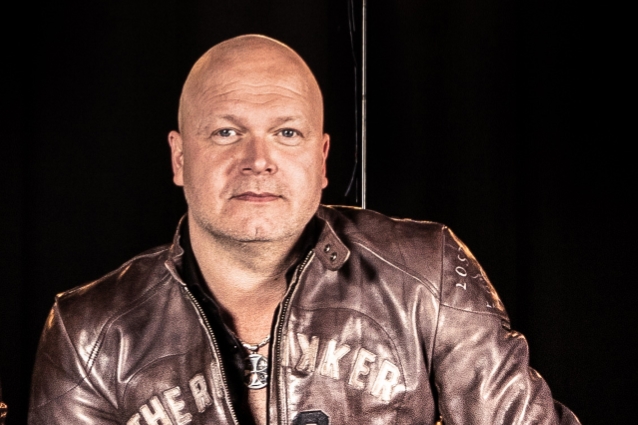 MICHAEL KISKE Says HELLOWEEN Reunion Was 'Meant To Be'

HELLOWEEN vocalist Michael Kiske recently spoke with Jimmy Kay of Canada's The Metal Voice. The full conversation can be streamed below. A few excerpts follow (as transcribed by BLABBERMOUTH.NET and The Metal Voice).

On how the "Pumpkins United" reunion came about:

Michael: "For a long time, this was totally impossible for me, because I was hurt and full of anger and I didn't want to have anything to do with it. For a long time I didn't want anything to do with the metal scene. It went very deep. But in the last couple of years before the reunion, without me noticing, things changed somehow, and I realized something is different when I ran into [HELLOWEEN guitarist] Michael Weikath in 2013. It was a festival in France and suddenly I was standing in front of him and he said something like, 'Michael, what have I done that you can't forgive me?' [laughs], which I thought was a great line. Then I just [said], 'You know what? I think I have forgiven you a long time ago.' That was just how I felt. There was no anger — I was totally relaxed. We talked a little bit, and this is how it all started for myself. I was not aware that during the years something had changed in me. I believe we're here to learn. I believe that life is not about getting fat and just being happy and satisfied all the time — it's actually about going through difficult phases again and again and growing out of it, and I think we grow most of the time out of the difficult phases we grow through. Happiness makes us rather decadent. We all need happiness — otherwise, we hate life — but if you have reached a certain age, you realize as painful as things are sometimes, you actually learn the most out of the difficult parts of your life. I have learned so much, especially during the years outside of HELLOWEEN when I was on my own, being my own man without a band behind me. Not even management — I was completely on my own for a number of years, and I dealt with a lot of spiritual things. All those years, I learned so much and I gained so much out of these years that after a while, I just couldn't be angry anymore about what happened, because I just realized it was good for me. I think that plays a big role in why I can do this now. I think it was kind of meant to be, this genius sort of karma configuration."

On what caused so much bad blood in the first place:

Michael: "When I talked to Michael or anyone else who was part of it, everybody has a different view. Everybody has experienced something completely different, which to me was a clear sign that there was nothing really going on. It was no objective reason for anything — it was just meant to be over. There was just bad spirit seeded among us somehow. There was demons sitting between us and making sure nothing works anymore, because it was meant to be over. It's really interesting to see how completely different every individual experienced those years."

On who made the "first call" to get the reunion rolling:

Michael: "It was actually me. I was actually the one who started it in a way. I mean, Kai Hansen always wanted to do it — he was always saying something that he would love to do something like that at least once more, and I just remember this after this thing with Weiki in France happened, I realized something had changed within me. After that, we had some nice shows in Spain with UNISONIC. I remember that the gig was over, and we were backstage changing, and Kai turned around, looked at me and said, 'Michael, if we don't do something once more under the name of HELLOWEEN, that would be so stupid.' I said, 'You know what? I'm open.'"

On sharing the stage with latter-day HELLOWEEN vocalist Andi Deris:

Michael: "That's the funny thing. When I started to bring up this idea, I was not thinking about sharing the stage with Andi. I was thinking we could do a sort of a 'Keeper Of The Seven Keys' reunion tour, or something like that. But later on, the manager for HELLOWEEN was making it clear to me you can't really do that — you can't create another HELLOWEEN band that is in competition with the nowadays HELLOWEEN band. It doesn't work. We have to do something together. I slowly realized, 'Yeah, he's right,' and then after a while, I started to actually like the idea because it sends out a nice message. Of course, it's great in terms of a show for the audience. It's much more entertaining. You can make a big circus, which we do, but it's not something that is easily done. We didn't know if this would work out, because I didn't know Andi — I'd never met him before. I was his pain in the ass for a number of years when he got criticized from my fans, and he was my pain in the ass because he took over my job. We didn't know each other, but, of course, we had an effect on each other. It was a very interesting thing to get together, and we both were very nervous, and it was very interesting to see how good we actually get along just as people. We like each other now, which is so helpful. You don't have to go on stage and fake something while hating the other person. I couldn't do that. I'm really happy that this worked out that way, but we didn't know. It was something that we just had to check and see what happens, and it turned out really nice. I like hanging out with him, which is very, very cool."

On what to expect from the "Pumpkins United" studio album due in 2020:

Michael: "It wasn't the original plan in the first. You have to do step by step. We just wanted to see how this goes down, and how we get along. But since everything worked out so nicely, and it works totally on the human level, which is a great experience — even better than some of the other stuff that I've done later on — obviously, that idea came up. We sat together and we made that decision: 'Let's frickin' make a record with this bunch of people, with two singers.' There's a lot you can do. Artistically, just in terms of making an album, its an interesting thing to do, because we are very, very different type of singers, and you can work with that in terms of songwriting. It will be interesting what comes out of it. Honestly, I have an opinion about what I would do, but I'm not a main songwriter. I don't even know if I will be writing a song for this. I'll see what happens, but there are other musicians in this band who I consider as the key songwriters. It's definitely Andi; it's Kai; it's Weiki; it's Sascha [Gerstner]. In the end, it will depend on what they come up with. I would love to sing some stuff in the 'Keeper' vein, because I like those records still. I like some of the stuff that they have done later on, too. I wasn't listening to any of it for a number of years, but now that we're doing this together, of course I had a free head and a free heart to listen to it, and they've done a whole bunch of stuff that I think is pretty cool. Anything that we have done under the name of HELLOWEEN, we could actually do. It could be anything, but I would love to have some material that has some of the 'Keeper' vibe to sing. That would be great."

On the taped vocals that the band used during the opening show of the "Pumpkins United" tour:

Michael: "It was not all playback. I'm quite glad that I did it once, because I'd never done anything like that before and I am certainly not going to do it anymore because I can't — it just doesn't work. The situation was that I had an infected throat already before the first show. I wanted to skip the shows and management said, 'We can't start this tour with canceling shows.' So they talked me into it. The whole band made that decision, and then management came to me [and said], 'Michael, we have recordings of you from six weeks earlier' – it was live recordings we did in some kind of a rehearsal situation — and they said, 'You just go out. You sing, and if the sound guy feels you're dying somewhere, he just sneaks [the playback track] in.' I didn't want to do it, but I said, 'Okay, if that's what you want to do, I'll give it a try.' The thing is, I'm so used to singing live that, of course, I messed it up. I pulled the microphone to the audience when the sound guy had my voice up there, so it came out. But I don't really take that that bad, as some people like to take it. I did it because they talked me into it, and because they didn't want to cancel the first shows. After that, I was already back. We only did it a few bits here and there. I am not going to do that anymore. The next time when I don't have a voice, I [will] either cancel the show or I do it the way I can, period. It was basically just because it was such a big thing for us. In any normal situation, we wouldn't have done that, but since it was this big reunited 'Pumpkins United' thing, a decision had to be made. I just followed that decision in the end."

The reunited expanded classic lineup of HELLOWEEN — featuring seven musicians, including Kiske and Hansen alongside Deris and Gerstner — has captured "the very best moments" from its ongoing "Pumpkins United" world tour and will make the footage and recordings available as a live CD as well as on DVD and Blu-ray in early 2019. In addition, there will be a brand-new HELLOWEEN studio album featuring Kiske and Hansen. The band's songwriting trio of Weikath, Hansen and Deris will retreat to the studio in 2019 to begin work on the disc, which is scheduled to arrive in 2020 via Nuclear Blast.

HELLOWEEN will tour North America in September, to be followed by additional dates in Latin America. The final "Pumpkins United" concert of 2018 will take place in Hamburg, right where all the madness started in 1984, at the legendary Sporthalle on December 22. 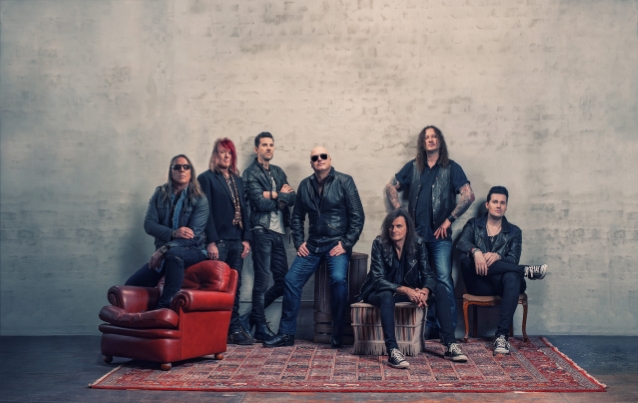