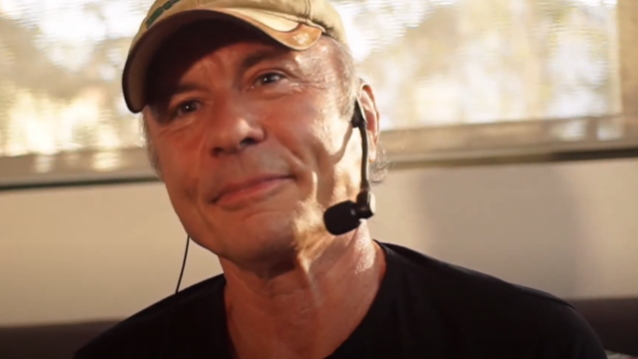 Last month, IRON MAIDEN singer Bruce Dickinson was a guest on the "Break It Down Show With Pete A Turner". During the chat, Bruce offered an update on his long-awaited new solo album which he recently resumed work on in a Southern California studio with his longtime collaborator Roy "Z" Ramirez.

In March, Bruce told Consequence about the progress of the songwriting sessions for his new solo LP: "I've been working on it, on and off, since [2005's] 'Tyranny Of Souls'. But between lockdowns and albums and MAIDEN tours and everything else, I'm looking for a clear space to actually nail and say, 'Okay, this is what it's gonna be,' and get Roy to put some backing tracks down. And then we can do it. So we're at the point now where we've already got — I don't know — anywhere between 50 and 70 percent of the material for the album, depend[ing] on what we pick, from things we've already got. And I think we'd like to tweak it a little bit. So I've got some time. When I finish this [U.S. spoken-word tour] in March, I've got three weeks in L.A. And so I'm gonna be tweaking a few things with Roy. And we'll see where we get to. And if we get to the point where we can start putting backing tracks down, then I'll be off touring with MAIDEN and he can be chipping away doing the backing tracks. And the technology exists now, of course, which didn't exist back in the day, to just get on a Zoom call with him and take a listen. We were already going that way on 'Tyranny Of Souls'. He actually sent me a CD of the backing tracks — just rough; no guitar solos; just rough — and I put a set of headphones on. I was in Japan on tour at the time, and I just walked the streets of Tokyo at, like, nine in the morning with a notepad, mentally writing words and melodies, and then just flew back to L.A. and did the vocals. And that worked out great; 'Tyranny Of Souls' is a great album."

Back in December 2017, Dickinson said that his next solo LP would likely include a reworked version of "If Eternity Should Fail", the opening track on IRON MAIDEN's 2015 disc "The Book Of Souls". At the time, he said that he had about "half" of his seventh record already written and he also confirmed that "If Eternity Should Fail" was originally penned as a Dickinson solo track.

He told Finland's Kaaos TV that the original plan was for his next solo record to be "a whole concept album, which was gonna be called 'If Eternity Should Fail'. And 'If Eternity Should Fail' was the title track to my new solo album," he said. "And a bit like [Dickinson's 1989 solo song] 'Bring Your Daughter To The Slaughter' [laughs], it got commandeered for IRON MAIDEN. So if I did do another solo album, which I think I will, I might just stick to my original plan and have that as the title track. I mean, I did write it — it was the first track that I wrote for it. So, yeah, I'd probably still include that song. But it would be… the feel would be slightly different — not very much, though — from the MAIDEN version."

In 2015, Dickinson told France's Hard Force magazine that "If Eternity Should Fail" ended up being used by IRON MAIDEN after bassist Steve Harris heard the demos that Bruce was working on for what was supposed to be his next solo album. "And [Steve] went, 'That's a really cool song. Can we use that? That's gonna be the opening song on the album,'" he recalled. "And I went, 'Yeah, okay.' And he was already writing, I think… He was already thinking of 'The Book Of Souls' as being the title, so he told me about the Mayan thing. And I'm, like, 'Yeah, that's cool. Okay. Yeah, I see where you're going.' But in my case, that song was written as part of a story. So the spoken word at the end is the beginning of a story that goes through the whole album. And one of the characters is Dr. Necropolis; he's the bad guy. And the good guy is Professor Lazarus; he raises people from the dead. So that introduces Necropolis in the spoken-word thing. And I asked Steve… I said, 'Look. Okay. I get having the song…' 'Cause it opens up with, 'Here is the soul of a man.' 'Yup. Get that. But what about the end?' I said, 'Will people understand what this is about? Because this is nothing to do with the Mayans or anything. This is to do with… I'd come up with a concept album that doesn't happen.' [Laughs] And he [went], 'No, no, no. It's just talking about souls and everything, and it sounds great.' I went, 'Okay.' [Laughs]"

I just can’t wait for you all to hear the fruits of our collaborative efforts.
Love and peace to all!🤘🏼