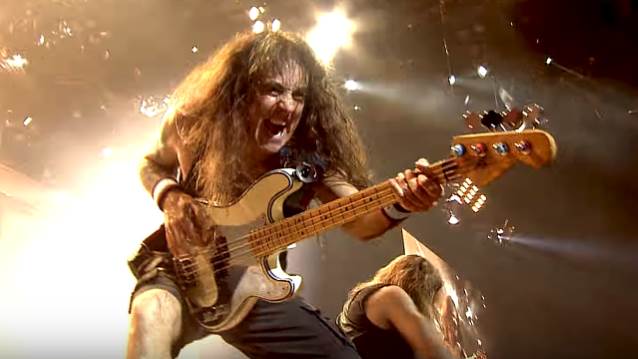 IRON MAIDEN's STEVE HARRIS: 'I'm Pretty Damn Sure We Will Do Another Album'

IRON MAIDEN bassist Steve Harris has told Metal Hammer magazine that he is confident the band will eventually get around to putting together the follow-up to "The Book Of Souls" album, which arrived nearly three years ago.

"We've got this [touring] cycle going on," he said. "I'm pretty damn sure we will do another album, and then all well and good, we'll go out on tour to back that up. How long that will go on for, I don't know. We've been talking about this kind of thing for the last 20 years, but as time goes on, it becomes more of a reality that one day we may not be able to tour any more. But I don't want to think about that. You've got to enjoy the moment."

Harris's latest comments echo those made by guitarist Dave Murray, who said last year that IRON MAIDEN had no plans to retire after the completion of the band's "The Book Of Souls" world tour. "We're not stopping after this tour; this isn't the last tour by any means," he told The Press-Enterprise. "We're going to finish this one out, which we're having a lot of fun [doing], and then we're going to take some time off and next year there's going to be some surprises."

When asked how he would feel if MAIDEN suddenly came to an end, Dave said: "If it was to finish tomorrow, I think I could say quite honestly that I've been very happy and very lucky and have done everything, enjoyed most of it, because of all the places we've traveled to, you'd never go there. We're lucky enough in that respect to see the world several times over by being on tour. That in itself has been a great experience and also playing music and being able to express ourselves in a melodic form, an aggressive form and just have fun with that. The future, there's still things to do so you just keep inventing new things all the time, try to create new things every day."

The U.K. leg of IRON MAIDEN's "Legacy Of The Beast" tour kicks off in Newcastle on Tuesday, July 31.

Since the tour's opening night in Tallinn, Estonia at the end of May, the band has already played to around 750,000 fans in sold-out stadium, arena and festival shows across Europe, including selling out the prestigious Atletico Madrid football stadium in Spain last week.