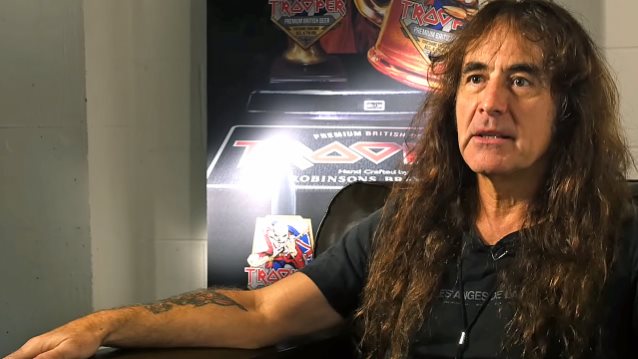 IRON MAIDEN bassist Steve Harris says that it's "really sad" to see Glenn Tipton bowing out of JUDAS PRIEST's upcoming tour as a result of his battle with Parkinson's disease.

The guitarist, who is now 70 and has performed on every PRIEST album since the band's 1974's debut set, "Rocka Rolla", is not quitting the band, but simply cannot handle the rigorous challenges of performing live. Joining PRIEST for its upcoming dates will be the band's co-producer and HELL/ex-SABBAT guitarist Andy Sneap.

Speaking to SiriusXM's Eddie Trunk earlier this week, Harris said about Tipton: "He'd come to see us play with BRITISH LION [Steve's side project] a couple of years ago in Birmingham and we had a good chat then, and he seemed pretty good, to be honest. But I think it's been up and down with it over the years and it's just probably got to the point now where he can't really carry on, which is really sad. But maybe he'll be… I don't know if he'll be out performing [with the band again]. He's indicated he might be able to do a couple of songs here and there."

Harris also spoke about MAIDEN's longevity and once again reiterated his stance that the band has absolutely no plans of retiring. Asked if he thought when he first formed MAIDEN more than four decades ago that the group would still be around this many years later, the bassist responded: "No, not at all. I mean, you don't think that far in back then — you just think about the next album and the next tour. So that's how we've been carrying on, really. I've been asked that question so many times since 20 years ago: 'How long are you gonna carry on for?' I don't know. We'll carry on as long as we can. These days, I suppose, you've gotta look at everybody's health and there's things that might be out of our hands [that might determine] as to whether we carry on or not. But if we can physically carry on, we'll carry on [for a long time]."

IRON MAIDEN singer Bruce Dickinson was diagnosed with cancer of the tongue in late 2014. He later completed seven weeks of chemotherapy and radiation and made a full recovery.

Former IRON MAIDEN drummer Clive Burr died in March 2013. He was 56 and had multiple sclerosis.