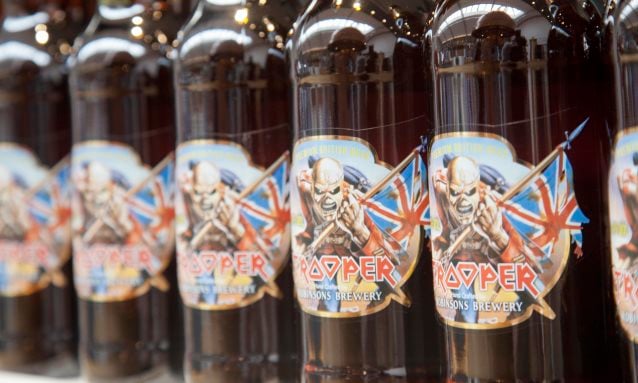 Robinsons Brewery has announced a new supermarket listing for their fastest-selling ale: Sainsbury's will be stocking Trooper nationally in just under 300 of their stores across the country!

This announcement follows the recent breaking news that Robinsons have now exported over one million pints of Trooper worldwide; now taking the total number of pints sold globally to over 2.5 million pints since its launch on May 9.

As U.K. beer in general struggles to raise the bar, with sales dropping by nearly 5 percent this year, worldwide demand for Trooper ale has both stunned and delighted regional family brewers Robinsons.

Robinsons managing director (beer division) Oliver Robinson commented: "Establishing a new beer in the U.K. alone is a long and difficult process but we feel that with two national listings in two of Britain's favourite supermarkets, and export orders with over 30 countries worldwide, in just six months, we are off to a great start."

According to Peter Walshe, global brands director at Millward Brown, there are three things that drive a brand to be successful: being meaningful, salient and different… Trooper is certainly a brand that ticks all three of these desired boxes; having a healthy mix of both emotional and rational appeal, being perceived not only as unique but as somewhat of a trend-setter, and most importantly it meets the consumer needs.

Robinsons director of marketing David Bremner explains why he thinks Trooper is succeeding where others miss the mark: "Distinctiveness and authenticity is really important for us. If you look at the British beer market generally, it can be quite homogenous; although things are starting to change. Trooper has more to it than just taste it has its own unique character and personality that fans buy into, and this has been backed up by a complete marketing strategy utilizing tools such as social media to really drive interest around the brand. Trooper not only appeals to fans of IRON MAIDEN, it is appealing to a new group of customers who will try traditional British beer perhaps for the first time. On top of that, rather than appearing gimmicky, we are raising the profile of Robinsons and perhaps all traditional British brewers."