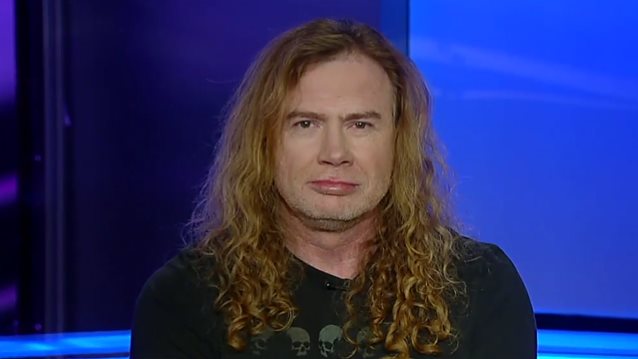 Is DAVE MUSTAINE A 'Truther'?

Asked for his opinion on President-elect Donald Trump, Mustaine said: "Well, I'm hoping that the nation gets past all the bickering right now and gets back to being the nation that we're all capable of being. I've been through ten presidents in my lifetime, and traveling the world as much as I do — you know that I travel a lot — seeing all these other different places, like we've played in Venezuela, with communism, and going into the Eastern Bloc back when they just had the [Berlin] Wall go down and stuff like that. We've got it really great here. And I'm hoping that everybody comes together. I know that there's a lot of people that think I'm a Republican, people think I'm a Democrat. I'm right at the middle, man; I'm an independent."

Pressed on whether he is a "truther" — part of the "9/11 Truth" movement, which claimed George W. Bush knew about, or even perpetrated, the 9/11 attack — and a "birther," believing that Barack Obama's published birth certificate was a forgery, Mustaine said: "You know, I've seen all the stuff on [theories rejecting the mainstream version of events about the 9/11 attacks]. There's no real way to tell unless you were there. And I think that it's too risky to put your neck on the chopping block and say stuff like that, because the way that the social media is right now, people's careers end in a snap because they say something, they believe something."

He continued: "I remember I went up to Canada and did an interview up there. And I had said something that I thought was funny on Obama's birth certificate. I didn't say that he wasn't born in America, but on the bottom of the birth certificate it said 'Ukulele' [as the registrar who signed Barack Obama's long-form birth certificate], and I was, like, 'Get out!' And I don't know if that was a mock one or not, but that was the one that was on the WhiteHouse.gov site. So he goes, 'Are you a birther?' And I was, like, 'What the hell's a birther?'"

Mustaine made headlines in 2012 when he told Canadian television and radio personality George Stroumboulopoulos that he was certain that Barack Obama "was born somewhere else than America." (See video below.) He later doubled down on that sentiment, asking conspiracy theorist Alex Jones why Obama hadn't been impeached in light of "all of the proof about his birth certificate being fake." He added: "And you see the signs in Kenya that say 'the birthplace of Barack Obama.' Hello?! C'mon, guys. How stupid are we right now?"

In a November 2009 interview with a Norwegian outlet, Mustaine offered his opinion on whether the government, not terrorists acting on orders from Osama Bin Laden, destroyed the World Trade Center as a pretext for war or to expand the government's powers. He said (see video in two parts below): "Everybody has their own perspective or their own understanding of what happened [on September 11, 2001]. Not very many people know why it happened, or who did it. A lot of people think it's an inside job."

He continued: "If you look on the Internet and you look at all the information that they have around that, something's wrong — something's absolutely wrong. A plane doesn't crash into the Pentagon and vaporize — it just doesn't. Okay? And why did they lay down all brand new ground out front? They destroyed the crime scene, the accident site. There was a plane crash there, and they completely resurfaced everything in a matter of a couple of days. Why? Out of respect for the dead?"