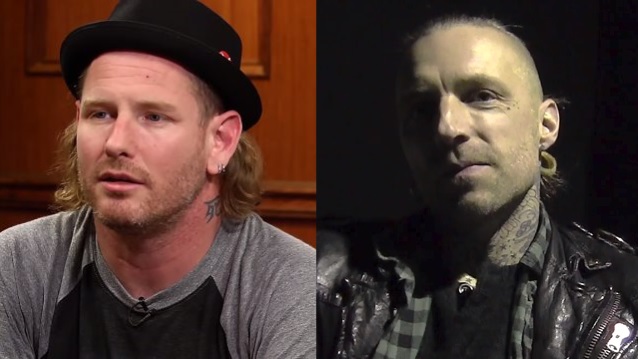 BACKYARD BABIES frontman Nicke Borg has played down similarities between his band's "Abandon" single and STONE SOUR's "Song #3", saying that BACKYARD BABIES "borrow a lot of things as well."

After "Song #3" came out earlier this year, an Italian DJ apparently pointed out the unmistakable resemblance between the track's chorus and that of "Abandon", which was originally included on the Swedish band's 2008 self-titled album.

During a recent interview with Barbara Caserta of Linea Rock, Borg was asked if he has heard the STONE SOUR song and whether he has an opinion about the two tracks sounding a little too alike for comfort.

"Oh, really? I had no idea," Borg said (see video below). "I know STONE SOUR, but I haven't heard the song. Is it on their latest album?" After Caserta answered in the affirmative, Nicke said: "Oh, I must listen.

"I never met [STONE SOUR and SLIPKNOT singer] Corey Taylor," Borg continued before clarifying. "Yeah, I met him, but we haven't been talking. I know I was hanging out a bit with Joey Jordison from SLIPKNOT, but I don't know any of them more than that."

Nicke then added, apparently jokingly: "But, of course, he has been listening to the BACKYARD BABIES — everyone has. So we are an influential band."

Asked by Caserta if he sees the similarities between the two songs as a "positive" thing, Borg replied: "Yeah. We borrow a lot of things as well. So… whatever."

"Song #3" is taken from STONE SOUR's latest album, "Hydrograd", which was released on June 30 via Roadrunner Records.

"Backyard Babies" came out in August 2008 and debuted on the U.K. rock chart at No. 29. The disc was helmed by Swedish producer Jacob Hellner, who previously worked with RAMMSTEIN and APOCALYPTICA.