Is This The Title Of The New AC/DC Album?

A mysterious poster has appeared outside AC/DC guitarist Angus Young's old school in Sydney, Australia. According to the Triple M radio station, the poster placed outside of Ashfield Boys High School reads: "Are You Ready? SYD PWR UP." At the bottom of the advertisement, there is a link to a web site with the iconic AC/DC red neon lightning logo. On the web site itself, there are links to the AC/DC store as well as a "Power Up" e-mail sign-up, leading to speculation that the band's long-awaited new album is called "Power Up". A newly released teaser video from AC/DC, simply featuring the hashtag #PWRUP, only fuels the chatter.

On Monday, AC/DC updated its social media with a short video clip featuring the lightning bolt alongside the sound of a guitar or musical instrument plugging into an amplifier. The speculation is that the legendary hard rock band is preparing to announce its comeback, possibly as early as this week or next week.

Earlier in the month, images seemingly taken from a new video shoot were apparently posted on the band's official web site before being swiftly removed. The photos, which were obtained by a Brazilian fan site, appeared to show frontman Brian Johnson joined by drummer Phil Rudd, bassist Cliff Williams and guitarists Angus and Stevie Young. The pictures were the first of Phil and Stevie sharing a stage, adding weight to the rumor of Rudd's return.

In February 2019, a photo surfaced on social media suggesting that Williams has also returned to AC/DC and will appear on the rumored comeback album, which is expected to be released in 2021.

This poster has popped up outside Angus Young's old High School. What are AC/DC up to? 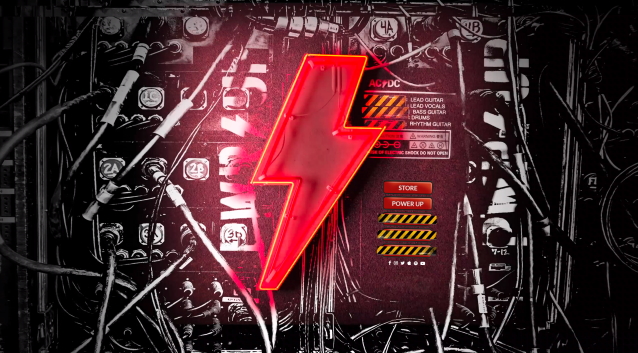