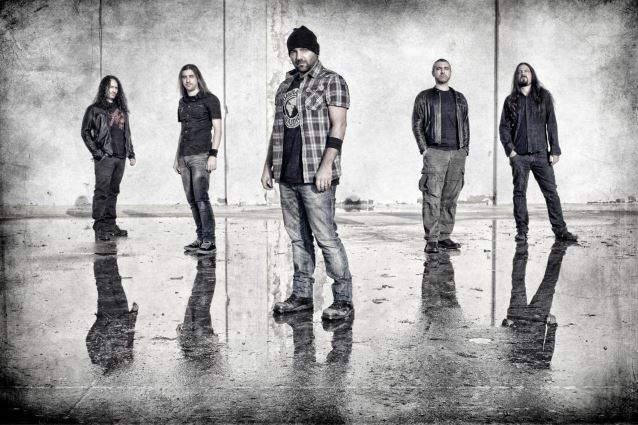 Frontiers Music Srl has announced the signing of Italian progressive metallers DGM to a multi-album deal. The band's new CD will be released in late summer.

DGM started in 1994 as an instrumental band and evolved over the years into a formidable and tight unit, offering super heavy riffs, tight drum patterns, beautiful melodies, classy arrangements, and top-notch musicianship.

With eight full-length studio albums, one EP and a live CD/DVD under their belts, DGM is a band that has reached full stylistic maturity and is truly at the top of their game. The band also spent a good amount of their time touring worldwide, taking part in some of the most important metal festivals, including ProgPower USA, ProgPower Europe, PPM and Gods Of Metal. They also supported SYMPHONY X on their "Iconoclast" European tour in 2010 and headlined an Asian tour in 2014, with shows in Japan and China.

DGM guitarist and producer Simone Mularoni says: "We are really excited to start this new journey with Frontiers Music Srl! We feel blessed and honored to see our name close to the bigger acts of the rock scene we all love and to be part of a label we follow since the beginning of its career. In particular, we think this new album perfectly suits the path that Frontiers pursued over the years, since it's extremely melodic, epic but in the same time with all the usual DGM's trademarks! We cannot wait for all of you to listen to the new songs and to meet everyone on the road!"