The much-speculated reunion of GUNS N' ROSES — featuring singer Axl Rose, guitarist Slash and bassist Duff McKagan — has been officially confirmed for this year's Coachella Music And Arts Festival. The festival will take place over two weekends, April 15-17 and April 22-24, at the Empire Polo Club in Indio, California.

GUNS N' ROSES will play two concerts at Coachella: on April 16 and April 23.

McKagan and Slash have both shared the same Coachella announcement image — featuring the GUNS N' ROSES bullet logo against a desert backdrop — on their Facebook pages.

"It's a huge get for Paul Tollett and the Coachella team," Dave Brooks, founder and executive editor of Amplify, an online magazine about the concert industry, told The Press-Enterprise. "It's the biggest reunion since RAGE AGAINST THE MACHINE."

Also scheduled for Coachella Music And Arts Festival is the return of LCD SOUNDSYSTEM as well as OF MONSTERS AND MEN, FOALS, HALSEY, JAMES BAY, RANCID, M83, and more.

According to U.S. music industry magazine Billboard, GUNS N' ROSES is also currently in negotiations to do a 25-date football stadium tour in North America next summer for which they're asking $3 million per show. The most expensive tickets for the shows are slated to sell for between $250 and $275.

Rose and Slash will be featured in the lineup, with bassist Duff McKagan also involved. There is no word on whether original guitarist Izzy Stradlin or drummer Steven Adler will appear. Consequence Of Sound says that Adler's original replacement, Matt Sorum, is also on board, while other reports have suggested that current drummer Frank Ferrer and guitarist Richard Fortus will round out the lineup.

Speculation about a reunion tour has been steady ever since Slash revealed last summer that he and Axl had repaired their friendship after being estranged for nearly 20 years.

The last show Axl and Slash played together was on July 17, 1993 at River Plate Stadium in Buenos Aires. The latest incarnation of GUNS N' ROSES, which only included Axl from the original lineup, played a residency in Las Vegas in 2014 but has remained silent since. 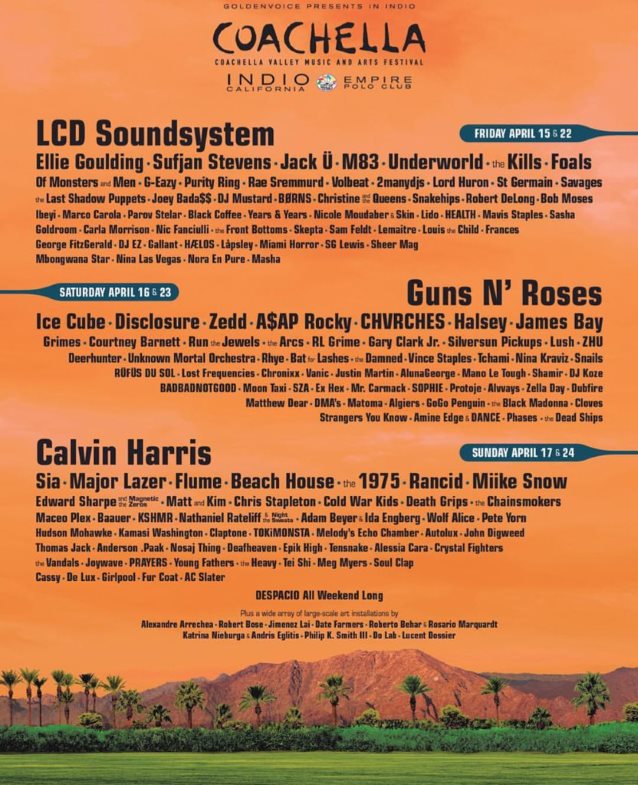