It's Official: SLASH FT. MYLES KENNEDY & THE CONSPIRATORS To Release New Album In The Fall

"I'm excited about the new stuff we put together for this next record; it's got some cool songs and it's got a great live feel," explains Slash. "I've been working with Myles, Brent and Todd for about eight years now. It's been an amazing ride so far; as a band we continue to get better which is great. With the addition of Frank since the 'World On Fire' tour, I feel we have hit a great, creative stride which I definitely think shows on this next record."

Slash adds: "GUNS N' ROSES will be headlining European festivals this summer, it's going to be a 110 percent performance and a huge blast. I love doing European fests and this is the first time we've done any proper festivals over there on the 'Not In This Lifetime' tour. It's indescribable to explain these shows. I'm looking over and seeing Axl, Duff and Dizzy whom I've known forever, but it also feels like an entirely new experience with Richard, Frank and Melissa. It's like being in a new band, except there's a chemistry that is established from days of old, so it's a natural thing that’s always been there."

Rumors of a new CONSPIRATORS disc were started last December when Slash's girlfriend Meegan Hodges told a fan on Instagram that the guitarist was in the studio with Kennedy recording the next CONSPIRATORS album. But Kennedy claimed in a radio interview a short time later that there were no concrete plans for him to reunite with Slash and work on new music. The vocalist, who also fronts ALTER BRIDGE, went on to say that he would spend most of 2018 touring in support of his solo album, "Year Of The Tiger", with 2019 likely to be dominated by his commitments to ALTER BRIDGE.

After a fan reached out to Meegan on Instagram asking her to clarify her previous comments following Kennedy's remarks, she responded, "Maybe you should ask the band guys," and followed it up with a smiley face.

Kennedy has said in various interviews that he and Slash had about half an album's worth of new material in the works toward the end of the "World On Fire" touring cycle, but Slash's touring commitments with GUNS had prevented him from becoming involved in any other projects.

The current GUNS trek — which features Slash and fellow original members Axl Rose and Duff McKagan — launched in April 2016 and has since grossed more than $400 million, with more European dates coming this summer.

GUNS N' ROSES has been off the road since November when it completed the North American stadium and arena run leg of the "Not In This Lifetime" reunion tour with three shows in Los Angeles.

"Year Of The Tiger" was released on March 9 via Napalm Records. 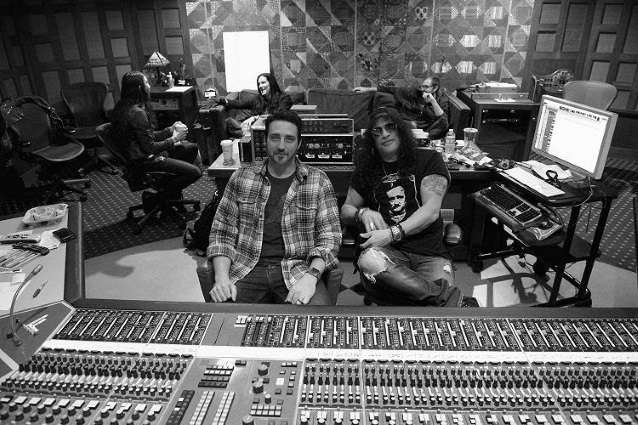