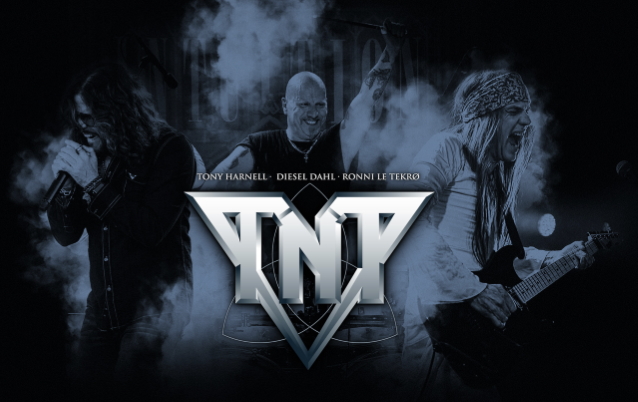 It's Official: TNT Reunites With Singer TONY HARNELL Once Again

Norwegian hard rock band TNT has officially reunited with American singer Tony Harnell. The 60-year-old musician, was born in San Diego, grew up in California and moved to New York when he was 16, will rejoin forces with guitarist Ronni LeTekrø and drummer Morten "Diesel" Dahl on stage in 2023 for select live appearances, including the Tons Of Rock festival in Oslo the weekend of June 22-25.

Earlier today (Tuesday, November 8),Tony, Diesel and Ronni released the following statement via social media: "TNT are back! More than 40 years after it all started we're very happy to announce that 2023 will be an explosive year as brothers in rock Tony Harnell, Diesel Dahl and Ronni LeTekrø once again are gathering forces on stage. We are even more happy to tell everyone that our first show announcement for next year is Tons of Rock Festival in Oslo, the weekend of June 22nd-25th. Tickets on sale Friday this week.

"Can't wait to see you all on the road next year!"

This past March, Le Tekrø confirmed to the "Paltrocast With Darren Paltrowitz" that he had been in touch with Harnell about a renewed collaboration. Speaking about the group's status, Ronni said: "I've started writing new material, and I'm currently having good talks with Tony and the whole band. We have very much communication. And it's been 40 years [since TNT's formation]. But we're trying to bring the band back together and hopefully make one last tour of Europe and maybe America… I think we might wanna end the TNT chapter with dignity and do one last tour."

In April 2021, Harnell, who has been in and out of TNT several times throughout its four-decade existence, told "The Chuck Shute Podcast" that he didn't rule out returning to the band. "Ronni and I, contrary to popular belief, we talk often," he said. "Ronni's not a big technology guy, but he really loves FaceTime video. And it's kind of annoying, because I love him, but he'll call me early in the morning, 'cause he's overseas, so he'll call me early in the morning [for a] video chat, and I'm, like, in bed. But I love the guy. Whatever happens, we'll be on a beach someplace when we're in our 70s, laughing and hanging out.

"Most of the things that pushed us apart — again, contrary to popular belief — are business related," he continued. "I'll just leave it at that.

"'Never say never' is a good way to put it [regarding a possible new TNT album]. And there might be a time and a place."

In a 2019 interview with "80's Glam Metalcast", Le Tekrø said that he was still on good terms with Harnell. "Definitely," he said. "We talk regularly and we're even discussing making a kind of Page/Plant album, a Harnell/Le Tekrø album, which could maybe lead into something in the future. But I think me and Tony Harnell — I'm speaking not on behalf of him, but on behalf of myself — we need a different playground to do more extensive hard rock with other ideas, whereas TNT is more limited to a [specific] sound. You see what I mean? So, we're definitely buddies, and that will last forever. We don't hate each other, and we never did. That was never the [case]."

TNT's latest studio album, "XIII", came out in June 2018 via Frontiers Music Srl. The band's thirteenth LP was TNT's first to feature vocalist Baol Bardot Bulsara, who replaced Harnell. Baol is a Spanish singer whose debut with TNT happened in front of 8,000 fans in November 2017 when the band opened for German hard rock legends the SCORPIONS in Oslo, Norway.