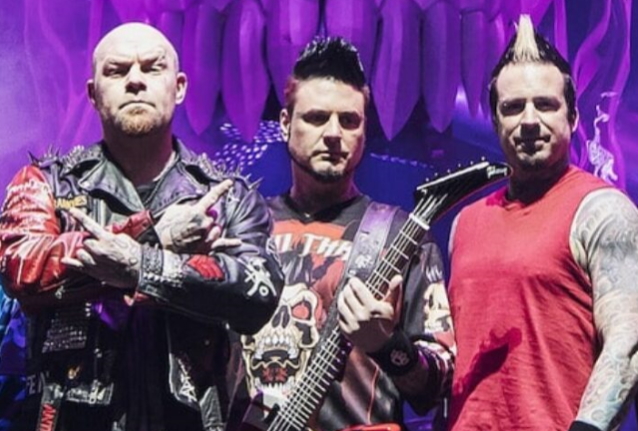 FIVE FINGER DEATH PUNCH singer Ivan Moody has reacted to the news that two of his former bandmates, Jeremy Spencer and Jason Hook, worked together on the new EP from Spencer's theatrical rock band PSYCHOSEXUAL.

On Friday, PSYCHOSEXUALsurprise-released a covers EP, "Songs To Stalk You By", featuring a guest appearance by Hook on two songs: the KISS classic "Watchin' You" and QUEENSRŸCHE's "Gonna Get Close To You". The recordings mark the first time Spencer and Hook have collaborated since they parted ways with FIVE FINGER DEATH PUNCH.

Moody, who is active on Instagram, took to the social media platform on Saturday to share a two-minute video message in which "congratulated" Spencer and Hook for reuniting on the PSYCHOSEXUAL EP while also "accepting" a non-existent "challenge" from his onetime bandmates to make a great new album.

Moody said (see video below): "As I'm driving home, my phone kept blowing up. I was like, 'Fuck.' So I pulled over to check it. And I got, like, a hundred different news feeds. And they all read something… I thought it was a joke at first, but it's very real. And it read: 'Jason Hook joins forces with Jeremy Spencer.'"

Ivan went on to say that he was "excited" to see Hook and Spencer play together again. "I'm not patronizing — I'm not," he insisted. "This comes from my heart.

"Jason and Jeremy, congratulations. I know you two have waited to do something together for years, and now you have the platform to do it, man. So let's see what you got," he said.

"Now, I could take this one of two ways. I could take this as a spit in the face, saying that you're going to do bigger and better. And the quote I heard was — and forgive me if I'm wrong on this — was that someone said the sex appeal has left FIVE FINGER DEATH PUNCH. Sound familiar?

"I didn't know we were out for Calvin Klein ads," Ivan added. "But if you're gonna be out there, then reach for the top, man — Drakkar Noir, Playgirl. Fuck it, right?

"I hope the two of you write the greatest fucking album you can muster. Challenge accepted. I'll be your huckleberry. Because as of today, I am personally gonna make sure that this new DEATH PUNCH album is like nothing you've ever fucking heard before."

Moody concluded the video by saying: "To all of our fans, thank you for sticking with us through all these years. Keep your ear to the ground. It's about to get real fucking interesting."

It should be noted that there is no indication that Hook has joined PSYCHOSEXUAL or that he and Spencer will collaborate on any new original music.

Hook exited FIVE FINGER DEATH PUNCH in February 2020 during the band's sold-out European arena tour. He later said that it was "time to pass the baton and move on to new challenges."