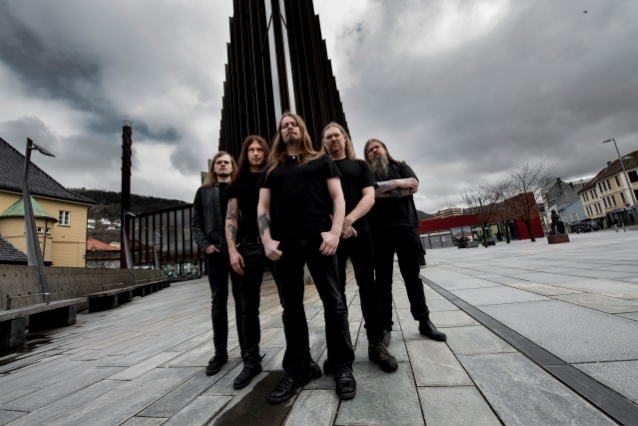 On what elements of black metal still exist within ENSLAVED circa 2018:

Ivar: "I think the atmosphere would be retained from those old days that there's still there, even though songwriting is maybe a little bit different and the musicianship, arrangements, and all that — last year we did a rendition of our first album ['Vikingligr Veldi'] at the Beyond The Gates festival. We did the whole thing. We still play old stuff during our live sets, so, we live and breathe, I would say, our entire catalog."

Grutle: "I don't think we will ever travel completely away from that concept. We're still extreme metal and there will always be dynamics between the harsh and shall we say, the beautiful or mellow. For me personally, that's really important in music. It's supposed to be emotional and it's supposed to be a reflection of your own mind. Everything is not completely horrible; it's not just black and white."

On the risks ENSLAVED took during the writing and recording of their latest studio album, "E":

Ivar: "The changing of members, like in the middle of the whole process. There was a moment there where everything could have been postponed. Then, the sensible thing, like normal people would do, put things on hold and see if we can find a keyboard player who can sing. And that moment passed and it meant, 'It's going to work out.'"

On what ENSLAVED did differently on "E":

Grutle: "The arrangements, of course. The vocal arrangements. I basically had to do all that by myself because [new keyboardist] Håkon [Vinje] wasn't involved in the process until we actually started the recordings. He actually went into the studio and did his things weeks after we finished. I think the whole band kind of stepped up a little bit because we had to."

On the pros and cons of having a new band member (Vinje) who is much younger than the rest of ENSLAVED:

Grutle: "He's positive and very energetic. I mean, we're old farts to him, really. I could have been his father. [Now ex-drummer] Cato [Bekkevold] could have been his grandfather or something. [Laughs] Of course, his musical skills are amazing, too. This guy, usually nobody wants to be the keyboard player. This guy, grew up, his father played him DEEP PURPLE and he was like, 'This is it! This is what I'm going to do. I want to be a keyboard player.'"

Ivar: "'I want to be Jon Lord [DEEP PURPLE] when I grow up.' I think a potential con would have been if we got a young guy. Sometimes you meet new bands who had success very fast and they have a bit of an annoying outlook on things for us where we've worked our way up. Luckily, Håkon has been in a band who has been struggling for years already. He's very appreciative of the setting ENSLAVED is in now. It's a good human thing: 'If you weren't there during the war years, son.' He gets that."

Grutle: "He doesn't know a lot about the band history. We were in Montreal the other day. They screened the movie, the documentary, he was so fascinated, he was like, 'I didn't know these things.' I was like, 'And you're in the band?'"

Ivar: "For us, it's a very good thing. I think for some bands it can be problematic because there could be a lack of what they perceive as respect tor something like that, but we can also exploit it for our own entertainment. He'll never know when we tell old stories what is true or not."

On being confident in writing "simpler" songs:

On whether ENSLAVED's music is getting more difficult to play in light of their new approach:

Ivar: "Yes. The new album is the most difficult thing we've done. It forced us to think about rehearsal in a new, old way. It was enough just to play the same songs and learn the songs. We really had to go and spend some extra time and find the mechanics of the songs."

ENSLAVED will embark on a co-headline European tour with HIGH ON FIRE. The string of dates will run from late September through to mid-October, and is set to include 14 shows across seven countries. Two of the U.K. show dates — Milton Keynes and Leeds — will be ENSLAVED headline shows.

"E" was released last October via Nuclear Blast. The follow-up to 2015's "In Times" was recorded at Duper & Solslottet Studios in Bergen and was once again mixed and mastered by Jens Bogren at Fascination Street Studios in Örebro, Sweden.