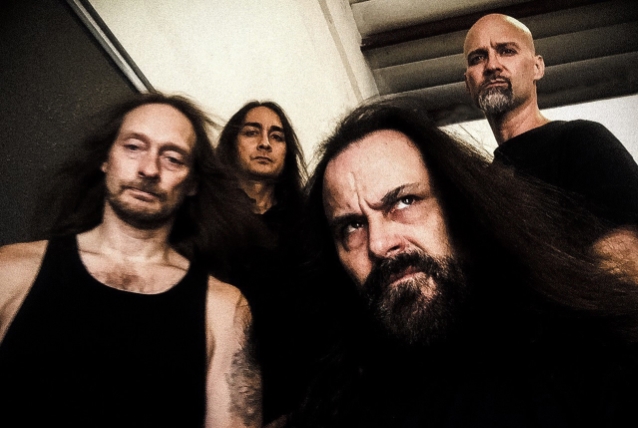 DEICIDE's GLEN BENTON: 'It's Kind Of Hard To Write Inspired Music When You Know It's Just Going To Be Given Away'

Josh Rundquist of That Drummer Guy recently conducted an interview with frontman Glen Benton of Florida death metal veterans DEICIDE. You can listen to the entire chat below. A few excerpts follow (transcribed by BLABBERMOUTH.NET).

On the songwriting process for DEICIDE's upcoming album, "Overtures Of Blasphemy":

Glen: "We all individually, me, Steve [Asheim, drums] and Kevin [Quirion, guitar], write individually. As each one of us would write a song, we'd bring it to practice and go through it and fine-tune it. After this many records, you just really focus on all the mistakes you've made and the things that work and the things that didn't work, just work off of those."

On how DEICIDE continues to "progress":

Glen: "That's how it's supposed to happen. That's why you have to sometimes make changes here and there to achieve that ultimate goal, but yeah, that's the ultimate goal is to get better with each record. You can't just stay in 1989. That's just not going to work."

On how he progressed personally on "Overtures Of Blasphemy":

Glen: "I got back into writing music, so I wrote a few of the songs on the album and I'm back the playing six-string again. So, yeah, I've progressed, obviously, back writing again. Yeah, I mean personally, yeah, I got my, I don't know what you call it, 'confidence' back for writing again. I got my motivation back for doing that. It was a fun time, man. It was a fun record."

On when the songwriting process started to gel:

Glen: "In the beginning, we started writing or when I started writing, Steve wrote a couple, Kevin had a few and I started writing. When I started writing, it was, like, 'Hey, man. He's even writing so we better get moving on this thing.' We had a talk about how we wanted to make it catchy and make a record for us. Not trying to please… I would rather please more people. The best way to describe it is the YouTube videos now when you got 5,000 likes or 'thumbs up' for a song or a hundred 'thumbs down.' Well, I would rather make music for that 5,000 people than that hundred people. That really was the focus and where we wanted to go. We wanted to make it fun. After this many years of doing it, man, you need to do things to make it fun."

On his thoughts on the music industry:

Glen: "Lately, the music scene has been kind of dried up. There hasn't been too many records that have been put out recently that hype things up, that people are excited about, getting their hands out. With the music business now, it's kind of hard to write inspired music when you know it's just going to be given away. It's kind of hard to invest that time and effort into something that's going to be given away. I don't want to say, not everybody, but there's a lot of bands that lost their energy because of that whole thing."

On DEICIDE trying to be forward-thinking:

Glen: "Here's the way I look at it: If you were a painter and you were painting one particular painting of one particular thing, after everybody got their hands on it, everybody would be… your sales would go nowhere, but if you keep painting, if you paint a painting that's different every time, it appeals to people every time and you get better every time — that's the name of the game. I know everybody wants me to remain 1989 DEICIDE. I would have been out of business years ago if I approached this thing like that. This is our last contractual obligation to Century Media, so whenever you leave a record company — they've been good to us. They've pretty much stayed out of our hair for the most part. Like I said, we have nothing to lose. Let's just go out and do a great record and leave on a positive note."

"Overtures Of Blasphemy" will be released on September 14 via Century Media. The follow-up to 2013's "In The Minds Of Evil" was produced by Jason Suecof (THE BLACK DAHLIA MURDER, TRIVIUM) at AudioHammer Studios in Sanford, Florida. The cover artwork was created by Zbigniew M. Bielak (GHOST, PARADISE LOST, MAYHEM) and can be seen below. 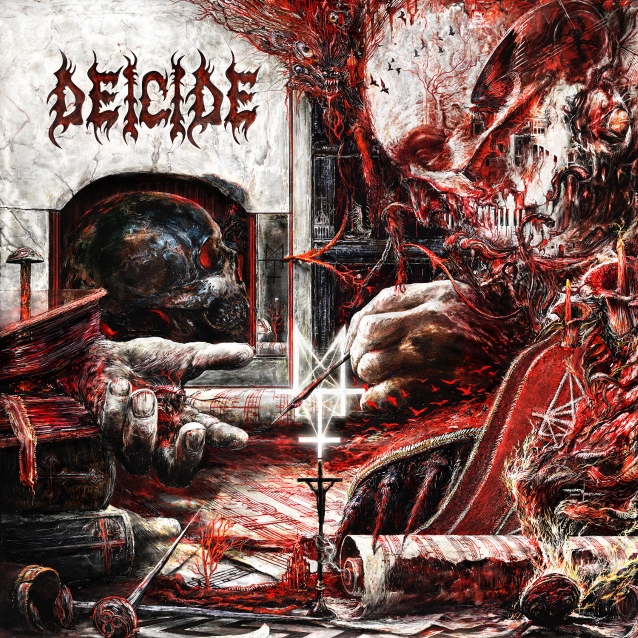