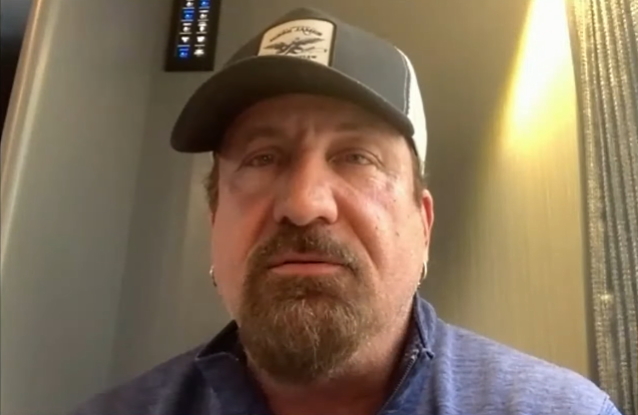 JACKYL's JESSE JAMES DUPREE Decries Polarization In Politics: 'The Truth Is Always In The Middle'

Jesse James Dupree of long-running southern hard rockers JACKYL was a recent guest on "That Jamieson Show". You can now watch the chat below.

Speaking about his cover of Merle Haggard's "The Fightin' Side Of Me", which he recorded with his JESSE JAMES DUPREE & THE MODERN DAY FRONTIERSMEN project, Jesse said: "When the election was going down, you've got these guys that, God bless 'em, they get so polarized, either hardore Republican or hardcore Democrat. And I'm fine for everybody believing in what they believe in and fighting for it to an extent, but as the song says, and Merle said it — it was song of the year in 1971 or something — and the song says it very clear: you can pick your side, and you can be passionate about it, but when you start running down our country, you're walking on the fightin' side of me. So let's all remember that we're on the same team and don't be assholes, just because some media news commentator is doing his job at making us pick sides. We've all become victim of — we might as well be watching a WWE series, because everybody's gotten ridiculous with not understanding the one common reality, and that is the truth is always in the middle. So the Republicans ain't got it all figured out, the Democrats ain't got it all figured out. We need to pull everything back to center, flush the toilet and start over again."

JACKYL has just released a new concert DVD and CD, "Family Reunion - Live In Kansas City". The set was recorded during the band's December 21, 2019 performance at The Midland in Kansas City.

Jesse spoke about the DVD during a May 2020 Facebook Live chat. He said: "JACKYL did record a live DVD. And we recorded it — a live concert — at The Midland Theatre in Kansas City in December. It was sold out. There were nine cameras. [There were] 3,000 people in attendance. The place was just electric. We had DMC from RUN-DMC come out and sit in with us. We did 'Just Like A Negro', we did 'It's Tricky'. It was just a special night. It was the last show of the year.