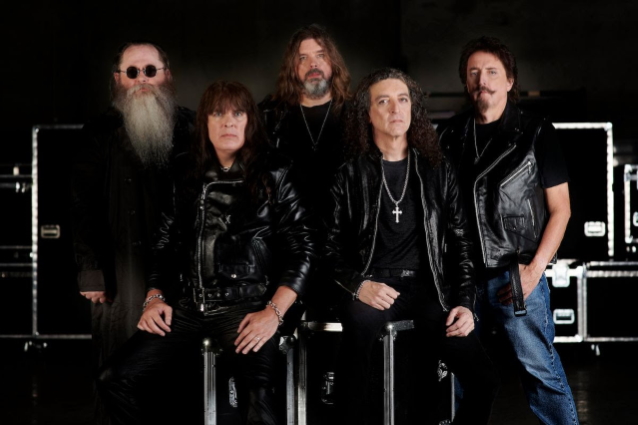 Veteran U.S. heavy metallers JAG PANZER have signed with Atomic Fire Records for the release of their 12th full-length album, "The Hallowed", which is due out next spring.

JAG PANZER guitar player/founding member Mark Briody states: "JAG PANZER are proud to announce that we have signed to Atomic Fire Records. Over the years, we have seen the incredible promotion work done by Markus, Flori and their team. We felt that our music combined with their hard work could take JAG PANZER to the next level. We are very excited to bring 'The Hallowed' to Atomic Fire Records."

Atomic Fire Records founder/A&R Markus Wosgien adds: "When we got the offer for a new JAG PANZER album, it was already a kind of a no-brainer to give them a deal. When we heard the album, it became a must-have. Honestly, this is one of the best albums they ever did, and they have an armada of classics in their discography. They sound hungry, inspired and take all their trademarks to another level. We cannot wait to release their first singles and believe me, it was a hard choice to make. This is a future heavy metal classic to come!"

What came into being in 1981 in Colorado Springs has lost nothing of its rebellion and power, not even over four decades later. Being inspired by the onslaught of the New Wave Of British Heavy Metal, Briody and his comrades quickly became one of the most intriguing U.S. power metal acts, releasing some successful studio albums, including their 1984 debut album "Ample Destruction", "The Fourth Judgement" (1997),"Thane To The Throne" (2000),"The Scourge Of The Light" (2011) and their latest effort, "The Deviant Chord" (2017).

"Ken's done a great job on the last several tours," Briody says. "When he expressed interest in joining the band, we put him on an eight-week audition to see how he'd fit in with our creative process. Ken's contribution to 'The Hallowed' exceeded all our expectations. Harry, Rikard, John and I are all excited to have Ken on board."

It’s OUT!
Here it is my friends.
The cover of the new JAG PANZER m!
The HALLOWED