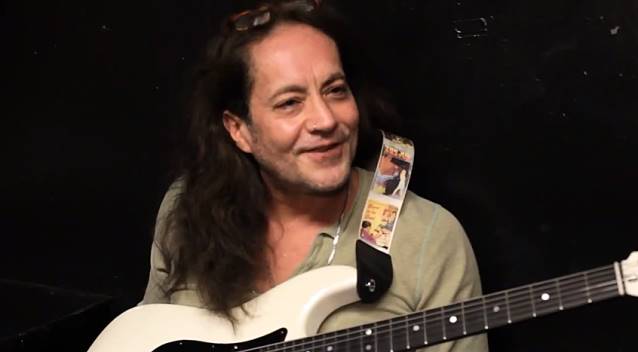 JAKE E. LEE Explains How He Supported Himself During His 'Retirement' From Music Scene

Jake: "Everything's looking really rosy right now… I was somewhat surprised at the amount of love that's out there for me. And I'm not saying I'm deserving of it, but... The band, we've been rehearsing now for a couple of days, and this band is just a great rock and roll band. I couldn't be happier with the people in it. It's not Jake E Lee going out there and reprising the glory days. It's a brand new band and it's a great band, and I can't wait for people to hear it."

Ont why he retired from the music industry:

Jake: "Back in the mid-'90s, I think the Jake E Lee shelf life expired. There comes a time when you're just not cool anymore and [back then] it wasn't cool to be me anymore… BADLANDS was my baby and, to me, it was the best band in the whole world. When we were playing gigs, in the middle of a show, I would just say [to myself], 'Damn it, this is as good as it gets.' I loved BADLANDS and when it broke up, more for financial reasons than anything else, it broke my heart. So I was a bit broken-hearted and I wasn't cool anymore, so I just figured I'd just try to bow out as gracefully as possible. 'Cause I'd had a good career. And I'm not one of those guys that needs attention. I don't need to be in the spotlight. I tend to shun it, if anything. So I really had no problem just retiring."

On the different rumors that had circulated about him while he was away from the spotlight:

Jake: "There were so many rumors, and there might have been a bit of truth to a lot of them. One of the rumors was that I was living as a car mechanic, which was not true. But I did like to tinker on cars. So it's, like, a little thing gets out and it turns into a big thing, where I was a full-on car mechanic, and I never was. I'm probably not good enough to be one. [Another rumor was] that I had fallen into a drug haze. I'm not an angel — I've done drugs — but I never got to a point where I was down and out. It was responsible drug abuse, I guess. [laughs] I don't know. I have done drugs. I've done drugs my whole life."

On whether he is still doing drugs:

Jake: "Actually no, I don't do them anymore. In truth, I did drugs as a teenager and I even did drugs when I was in RATT. I mean, everybody did; that's how you partied. After I got in Ozzy, and once I saw Ozzy and saw what a mess he was… When I was in Ozzy, that was his absolute messiest. And it kind of turned me off of drugs. So I really kind of quit doing drugs, pretty much, while I was in Ozzy, 'cause I always had that example of, 'Yes, you could be him if you keep this up.' Although I don't think I could have ever kept up with Ozzy; he was a monster, and I mean that as far as his ability to intake massive amounts of poison and still wake up the next day. So I quit doing it there. And in BADLANDS, we partied a little, but it was never anything on, like, a MÖTLEY CRÜE level. So even though I retired, I still went out and partied. [But] I never got that bad — not nearly as bad as anybody thought. I did drugs, and then, I'd say maybe five or six years ago, I decided, 'Ehh, it's kind of boring,' and I quit doing anything that I was doing. Now I just concentrate on fine Scotches."

On how he supported himself during his "retirement" from the music scene:

Jake: "During my retirement years, I had a lot of gear, and I would occasionally sell a piece of gear and pay my rent. Which is funny, because somebody would find out about me selling gear, and I'd see it on the Internet, and they'd say, 'Oh, look how bad into drugs he is. He's selling his gear for drugs.' Why can't I be selling my gear to pay the rent? [laughs] If you're that down and out, why is it whenever you sell something, it has to be for drugs? Maybe my power bill needed to be paid, and that was the case. I would sell off gear that I wasn't using anymore, and that helped keep me through those years — just having a large amount of gear and selling it off when I needed some money. But yeah, the royalties, I don't make enough on royalties to actually support myself."

On whether he gets any royalties from the two Ozzy records he played on: