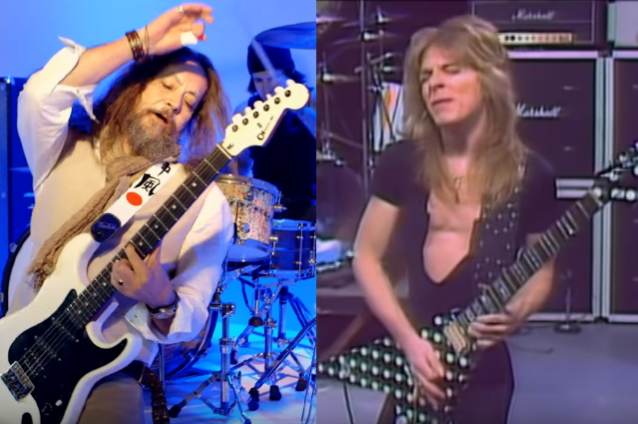 Guitarist Sebastian Ramstedt of Swedish blackened death metal veterans NECROPHOBIC recently spoke to Micha Kite of V13 Media about his distaste for most of the pop-tinted hard rock and heavy metal bands that ruled the Sunset Strip scene more than three decades ago.

"In the '80s, I hated all hair metal except for early MÖTLEY CRÜE and W.A.S.P.," he said. "You would watch '80s MTV, and there would be CINDERELLA, but you were waiting for SEPULTURA, and you hated it. But I don't have my guard up like that anymore, and those bands have very good guitar players. It takes a lot to write a great love song or an '80s metal song.

"The greatest guitar players at that time for me were Eddie Van Halen [VAN HALEN], George Lynch [DOKKEN], Warren DeMartini [RATT], and so on," he continued. "But Jake E. Lee [OZZY OSBOURNE] was my favorite, and his work on 'Bark At The Moon' and 'The Ultimate Sin' is the ultimate lead guitar work ever.

"I think Jake E. Lee is much better than Randy Rhoads, and you can't say that out loud, but I believe that," Sebastian added. "Other guitarists like George Lynch, who wasn't always heavy, had more fun in major keys, and they used the guitars in an unlimited way, which I admire. They didn't have to do fast songs or slow songs, evil songs or happy songs; they could do whatever they liked. If you only use one mode, like the gothic mode, it's very narrow what you can do with your music."

Lee, who was tapped by Ozzy to replace the Rhoads in Osbourne's band, played on two Ozzy records: 1983's "Bark At The Moon" and 1986's "The Ultimate Sin".