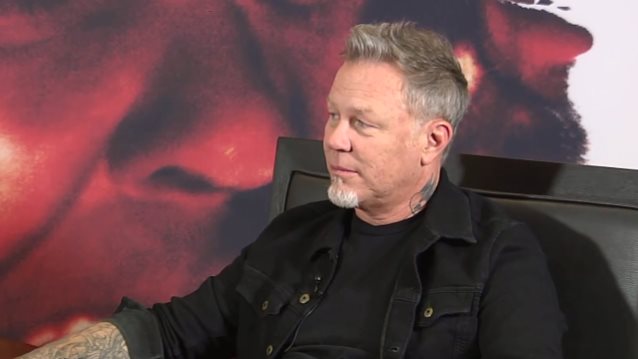 Mexico's Alfa 91.3 FM radio station recently conducted an interview with METALLICA frontman James Hetfield. You can now watch the chat below. A couple of excerpts follow (transcribed by BLABBERMOUTH.NET).

On the inspiration for METALLICA's new album, "Hardwired… To Self-Destruct":

James: "We always try to make a better record. It's innate; it's in us. We haven't wrote [sic] the best record yet. We're going to. I don't know when. I won't know when it is. So we always like moving forward, creating new stuff. For a band to be around for thirty-five years… There are bands that like to just play their hits and be okay drifting off into the sunset. We're not like that; we're artists and we love to create. It's like breathing for us — we need to do it. So it's always great when you have a new set of lyrics and music, and people still enjoy it."

On the effect of "fame" on METALLICA:

James: "Wow. Recently I've discovered what a dangerous drug it is. And there's obviously a song on this record that kind of deals with that. But fame can be something that destroys. You know, there's plenty of bands that have fallen apart because of fame, and one person's idea is different from another, and they can't get along anymore, and they think they're something that they're not. And that's always been dangerous, I think, and we've seen it happen, and we've tried to learn from it, but we'not exempt from it. It shows up, and we've all had our battles with it. Fame and adulation… People have an idea of what they want you to be, but when you're not that, they're disappointed. And there's a part of us that likes to please people, you know — we're an artist. So it's a constant dynamic that's happening. And I think the cure for it is confidence, and when you're an artist, you're not always confident of yourself. So it's a struggle at times."

On the importance of social media in the way bands interact with their fans in 2016:

James: "It's a great way to connect and stay connected with people. But also to still keep a mystery is important to me. So keeping an album, releasing little bits, you know… It's an art form. It's hard to surprise people these days, with so much information. So we're still trying to make it exciting. But there's obviously great things about it."

"Hardwired… To Self-Destruct" debuted at No. 1 on The Billboard 200 album chart, selling 291,000 copies in its first week of release. The effort consists of two discs, containing a dozen songs and nearly 80 minutes of music.